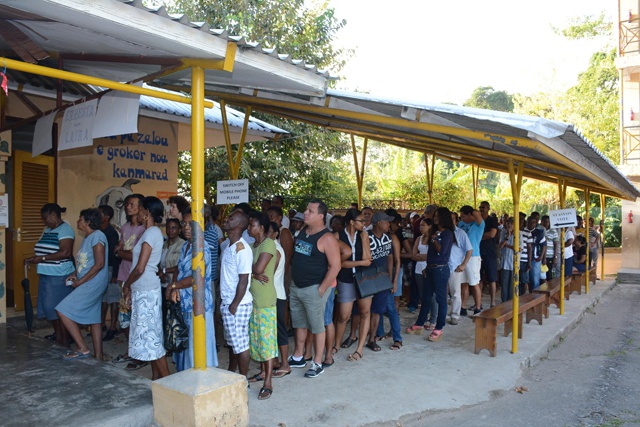 (Seychelles News Agency) - Seychellois voters went to the polls Saturday, the third and final day of voting for the sixth National Assembly.

SNA spoke to the representatives of the three parties and the independent candidates to hear their views on the three-day vote.

The Parti Lepep leader, also the Seychelles President James Michel, says the voting process has been smooth and peaceful.

“I hope that the process continues to be peaceful, that everyone goes to exercise their rights and goes home to await the final results,” Michel told SNA.

The ruling Parti Lepep, which has a majority in the current assembly, having won all 25 directly elected seats in the last elections in 2011, is fielding candidates for all 25 constituencies.

The party has always won a majority in National Assembly elections since the return of a multi-party system in 1993.

President Michel said on Saturday that “my party is very confident that we will win a majority" of votes.

He noted that Seychelles is a democracy, adding that he is certain of the people’s understanding of the need for peace, stability, harmony and unity to reign in the island nation.

“I am confident that the people have understood and will vote for a candidate who will ensure continued development, maintain peace and harmony and will not take decisions that will bring hate, vengeance and grudges in the country,” said Michel.

President Michel voted at 7.30 a.m. in Bel Air, a central district of the main island Mahe.

He then toured the different districts starting at Plaisance, Les Mamelles and Roche Caiman on the outskirts of the capital, Victoria, before going to Praslin and La Digue -- the second- and third-most populated islands.

Michel called on voters and party leaders to respect the outcome of the  election.

“Most voting stations are well organised and voters are being able to cast their ballots quickly. There are a few hiccups however, where some polling stations have not done a proper grouping of voters (according to alphabetic order of the voters’ register) and a lot of people were stuck at the entrance,” said Mancienne.

LDS was formed mainly by members of four existing opposition parties including the Seychelles National Party (SNP), which boycotted National Assembly elections in 2011.

Mancienne has predicted that the party will do well in the 2016 polls.

“I feel that we have great support. I cannot predict the results, but definitely we will win a majority.”

LDS is presenting a line-up of four women and 21 men vying for the 25 directly elected seats in the National Assembly.

Mancienne called on all Seychellois voters to exercise their civic duties peacefully.

“It’s a very important exercise that only happens every five years and it’s important that it unfolds in an orderly and peaceful manner. All will go well if that is the case.”

The Seychelles Patriotic Movement (SPM) is confident of a positive outcome in the parliamentary elections, says party leader Regis Francourt.

“We had predicted that the party will win two proportional seats and possibly two seats outright and we are maintaining this forecast,” Francourt told SNA on Saturday afternoon after he had toured the northern and central regions of Mahe.

Francourt, who is also the SPM candidate for the Anse Etoile district in the north of Mahe, said SPM was optimistic of doing exceptionally well in Beau Vallon also in the north, Mont-Fleuri, a central district ,and Au Cap in the east.

“Through our campaign we have noticed that we have a lot of support on the ground so we might even surpass expectations and do better than our forecasts,” he said.

The SPM leader said he was satisfied with what he had seen so far on the ground, and the process was going well in most polling stations he had visited, despite issues in some stations.

“Some voters complained that the alphabetical order system introduced for this election had slowed down the process and it caused confusion among voters who did not understand the process,” he told SNA.

Francourt added that he also witnessed a grouping of people at the Roche Caimain polling station, “but this was promptly brought to the attention of the presiding officer who dealt with the issue,” he said.

Francourt called on all voters to respect each other’s opinion and to ensure this election takes place in a peaceful atmosphere.

“Today should not be about political disagreement but rather a day for everyone to decide who should represent them by casting their votes,” concluded Francourt.

Ralph Volcere is a candidate in the eastern district of Au Cap.

Volcere  observed the election at Au Cap and told SNA, “Everything is moving smoothly here. There were little delays at times and the cumbersome process as they are calling out the Identification (ID) numbers again. I am happy with the way it moving.”

On his expectation, Volcere said, “I believe I will do well at Au Cap and I am telling everybody to continue the process in peace and quiet.”

The independent candidate of Anse Aux Pins, Danny Sopha, said he is generally satisfied with the proceeding of parliamentary election in his district, except for one issue: speed.

“Everything is going well except that the process is a bit slow. This is due to the new alphabetical system that has been set up. It is a good initiative but it has rendered the overall process to slow down,” Sopha told SNA.

Sopha said he did not observe voting in special stations and on outer Islands as he “didn't have representatives at the stations”.

“My agents are out and about keeping an eye out for irregularities. We do not have evidence that irregularities are taking place, but we know that there is the tendency for people to do so,” he said.

Although Sopha is running alongside three other candidates representing political parties in Anse Aux Pins, he remains confident that he will win.

“Results at Anse Aux Pins will be tight but up until now, my confidence is still high. I feel that I will win for Anse Aux Pins,” he said.

In his message to supporters, Sopha said, “It is not a bad thing to celebrate but we shouldn't disrespect others. We need to work in peace and unity while respecting the opinion of everyone.”

Georgie Prudence is one of the three independent candidates contesting this election for the central district of Mont Buxton. .

Prudence has expressed his satisfaction on how the voting process for Mont Buxton is being carried out so far, describing it as a smooth running.

"The line was split in three in alphabetical order which made everything flow easily up to now. We have adapted quite fast with this new system and the preparations that we have made before the elections have also helped,” Prudence told SNA.

Prudence said he is a bit disappointed with the amount of time that candidates are allowed inside the voting stations.

‘We have 15 minutes and then we have to go outside and wait for an hour and it is only then that we can go back in again, but I guess it is reasonable even though I wish it was more,” he said.

"I ask all Seychellois and Mont Buxton residents to respect the decisions of the majority and accept the results of this election," Prudence added. “May the best man win.”