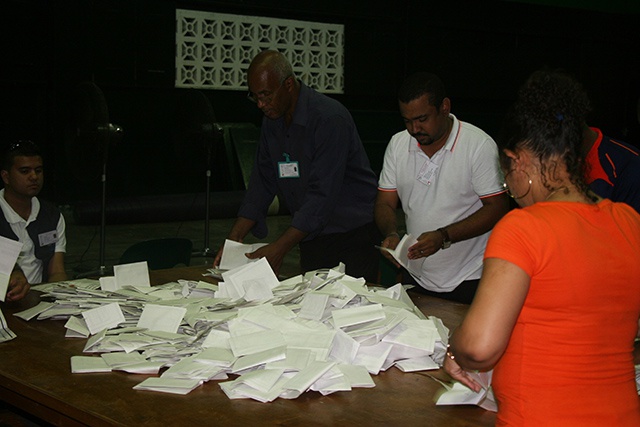 Long lines of voters forced several polling sites to remain open after the official 7 p.m. closing time. Voters around the nation said that a new alphabetical ordering system slowed the voting process at many sites.

Results were to be announced as counting is completed in each district. The first results were expected late Saturday.

English River – a central district on the main island of Mahe -- was among the 13 constituencies where voters remained in line after closing time. The electoral officer in charge of the station, Michel Mellie, said that although people expressed some frustrations the scene calmed down and everyone was able to vote.

“The process went smoothly in spite of a few hiccups. Aside of issues arising because of the use of a new alphabetical order system for voting, there were also people who turned up late in the afternoon,” said Mellie.

Compared to last December’s presidential elections, Mellie said that few people had been unable to vote and that those who were turned away were people who were not registered on the district's voter list.

“Firstly all particulars in the register were called out compared to the second round of polling in December. Secondly, during the course of voting our officers had issues with the identification of some voters, and thirdly stations had to stop voting to accept votes from special voting stations,” he explained.

According to Athanasius the election process went quite well despite issues arising around the use of the new alphabetical order system for voting. Athanasius said this was an issue especially in large polling stations such as Anse Etoile and English River.

“It’s understandable since it is a new system and it took a while for voters and for our staff to adapt. But in the end it was quite satisfactory, as we got about 80 percent voter turnout at 7 p.m.,” said Athanasius.

Roche Caiman, on the outskirts of Victoria, was the first district where vote counting started. Roche Caiman is the electoral district with the lowest number of registered voters -- 1,972 in total.

“The announcement will probably take a little longer than expected but since it’s not the presidential elections we will announce the results as they come in,” he said.

The official percentage of people who turned up to vote out of the 71,932 registered voters was yet to be confirmed by the Electoral Commission.

In the last parliamentary elections in 2011, 74.3 percent of eligible voters turned up. For the presidential election in 2015 around 87 percent of voters cast ballots while a historic run-off attracted a voter turn-out of 90 percent.

Parliamentary elections in Seychelles are held every five years and in the last election the ruling Parti Lepep won all 25 directly elected seats.

An opposition coalition -- Linyon Demokratik Seselwa (LDS) -- is seeking to reverse the trend, and the party has also expressed confidence that it will win a majority. The coalition is made up of four political parties including the Seychelles National Party (SNP), which boycotted the 2011 polls