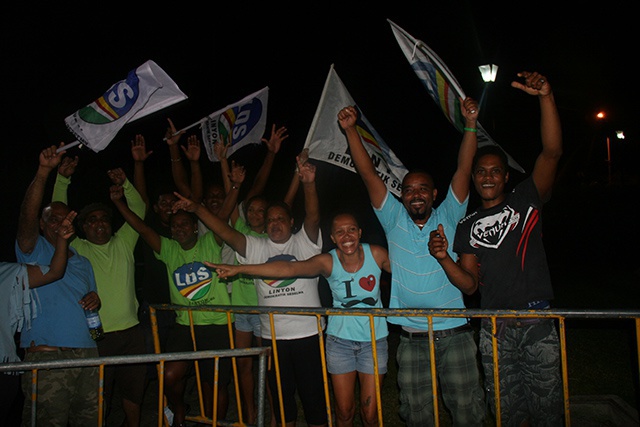 LDS has won majority votes in 15 of the 25 constituencies contested, while the ruling Parti Lepep took the remaining 10.

It’s the first time since the return of multiparty democracy in Seychelles in 1993 that the ruling Parti Lepep has lost its majority in parliament.

LDS is a coalition of four main parties including the Seychelles National Party (SNP) which boycotted the 2011 parliamentary polls.

The leader of LDS Roger Mancienne said the result marks “a historic step” for the country.

“It’s historic because it’s the first time that we have a transition of power in one of the branches of government – the legislature,” said Mancienne, adding that the transition had occured in a peaceful and orderly manner.

For his part the leader of Parti Lepep also the Seychelles President James Michel conceded his party's defeat in the elections.

For the first time in a Seychelles election, the Electoral Commission announced provisional results as and when they started to come in after 11 p.m. However, the population had to wait until after 4.00 am on Sunday to receive official results.

The third and final day of voting in the 115-island archipelago in the western Indian Ocean on Saturday saw the majority of the 71,932 eligible voters head to the polls.

According to the Electoral Commission the voter turnout was 62,939 representing 87 percent of the voters’ population. A total of 1,547 votes were rejected.

Compared to the 2011 polls which was contested by only one opposition group alongside Parti Lepep, the 2016 vote was highly contested.

A third party the Seychelles Patriotic Movement had candidates for 23 out of the 25 electoral districts. SPM candidates secured only 602 votes in total hence has not obtained any seats in the next assembly.

Three independent candidates also contested the vote in three districts – Anse Aux Pins, Au Cap and Mont Buxton. None of them have secured enough votes to be entitled any seats in parliament.

The parliamentary elections comes less than a year after voters in Seychelles had cast ballots in a presidential election which ran into a historic run off.

The leader of Parti Lepep, President James Michel, was declared the winner of the December 2015 vote with 50.15 percent of the votes against the SNP leader Wavel Ramkalawan who won 49.85 percent. Only 193 votes separated the two candidates.