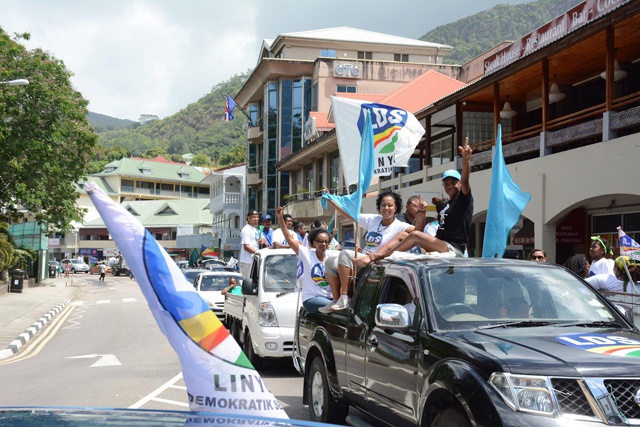 The win by LDS marks the first time since 1993 that Parti Lepep won't have the majority in parliament. (Patrick Joubert, Seychelles News Agency)

(Seychelles News Agency) - Supporters of the opposition coalition Linyon Demokratik Seselwa (LDS), which secured the most seats in the latest National Assembly election, celebrated the win in the island nation's streets Sunday.

Jordanna Simeon, 36, from Pointe Larue on the east side of Mahe, the main island, says she was thrilled with the overall results, although the LDS candidate standing in her district did not win the majority of votes.

The win by LDS marks the first time since 1993 that Parti Lepep won't have the majority in parliament.

“Being a youth I have always wanted a change in this country, and today we have managed to do it. I voted for a change and I am proud and I am going to celebrate,” Simeon said to SNA.

Another resident of Pointe Larue, Gilbert Kilindo, 49, said that LDS has made history and that all opposition supporters should be proud of this achievement.

“After all this time we have strived and fought for what we believe in and I finally feel free. This was my mission -- to give my people their freedom,” said Killindo.

The LDS celebrations which started very early Sunday after the results were announced, climaxed with a motorcade on Mahe.

Sylvanne Marie, 25, from La Gogue, in the northern district of Anse Etoile, says she will always support the ruling party despite the “shocking results.”

“I would like to congratulate all the newly elected members of the national assembly. We will wait for the feedback and see how many of them do reach out to help their districts,” said Marie, adding that for her it was the joint alliance between the opposition parties that made the difference.

Marvin Cadeau, 25, a resident of the La Retraite, also in the Anse Etoile district, told SNA that he has mixed feelings about the outcome of the vote.

“I do not like the fact that LDS has won but at the same time I am satisfied because now LDS is in the Assembly. Let us see if they can prove themselves and contribute positively in this country,” said Cadeau.

It’s the first time since the return of multiparty democracy in Seychelles in 1993 that the opposition will hold a majority in the assembly, and that the executive arm of the government is led by one party and the majority in parliament is from another party.

Roger Mancienne, leader of LDS, said the result marks “a historic step” for the country.

“It’s the first time that we have a transition of power in one of the branches of government – the legislature,” said Mancienne, adding that the transition had occurred in a peaceful and orderly manner.

When accepting the results early Sunday at the Electoral Commission’s Headquarters in Victoria, Mancienne also stressed on the importance of unity.

“Unity means that we should involve all Seychellois, regardless of their political views in this process and I hope that there will be a place for all Seychellois in this new era we are entering into, and that each one of us can make our contribution towards the development of our country.”

Mancienne said the polls were credible in spite of some issues that arose during the process and he has called for a cleaner and more respectful style of politics in the future “where people who want to stand for public office present their ideas and plans for their country.”

The Parti Lepep leader, also the Seychelles President James Michel, who said his party has accepted the people’s decision has congratulated all the elected candidates.

Michel noted the change in the island nation’s political landscape with the majority win of the LDS in the assembly.

He has welcomed LDS’ proposition for unity to prevail and to work in the interest of all Seychellois calling for the language of unity, love, not stomping on one another and for all to work together to for the country’s development, to be heard more often.

“I am happy to hear that the opposition is ready to join with the government to put these values into practice to move the country forward. For too long the country has seen a political polarization that has failed to bring us forward,” said Michel.

Compared to the 2011 polls which was contested by only one opposition group alongside Parti Lepep, the 2016 vote was highly contested.

A third party -- the Seychelles Patriotic Movement -- had candidates for 23 out of the 25 electoral districts. SPM candidates secured only 602 votes in total and did not obtain any seats in the next assembly.

The SPM leader Regis Francourt said he is disappointed with the results adding he was confident of his party’s ability to win at least two proportionate and two outright seats.

“While campaigning we had a lot of people who said they would vote and support us but on the day itself it seems those people did not vote for SPM,” said Francourt, adding that the movement will not quit its political endevours.

“We have just started and around 600 votes in itself is quite good. We now know the political landscape and have a base of supporters, so we are going to continue working with them in anticipation of any election that may arise in the future,” he told SNA.

Three independent candidates also contested the vote in three districts – Anse Aux Pins, Au Cap and Mont Buxton. None of them have secured enough votes to be entitled any seats in parliament.

A first group of international observers are expected to present their preliminary reports on Monday.