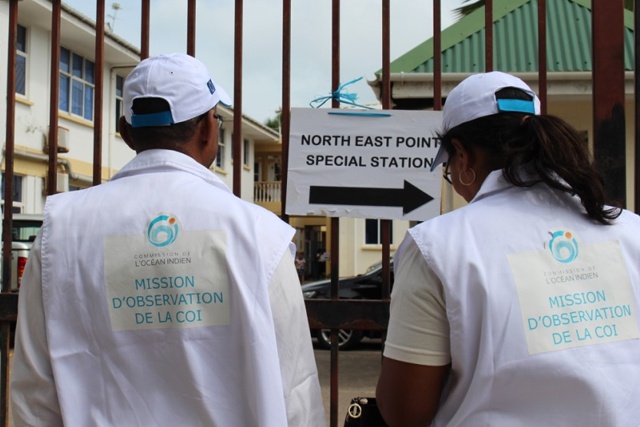 The delegation from the Indian Ocean Commission's Executive Committee of the Associations of Parliamentarians who observed the Seychelles National Assembly election presented its preliminary observation Monday. (COI)

(Seychelles News Agency) - The introduction of an alphabetical ordering system of voters during last week's National Assembly election was a good initiative but should be revised to make it more effective, said an international group of observers.

A nine-member delegation from the Indian Ocean Commission's Executive Committee of the Associations of Parliamentarians presented its preliminary observation Monday.

According to the chief electoral officer, Joseph Athanasius on Saturday, the alphabetical order system, which allowed polling stations to divide the register into different categories based on surnames, worked well in some areas. For others, presiding officers complained that it complicated and slowed down the process.

IOC also noted that names of some voters did not appear on the register, namely at two special voting stations, Silhouette and the Montagne Posée prison.

The mission noted the island nation's high voter turn-out: 87 percent of registered voters went to the polls. The group commended the professionalism of the polling staff and the high involvement of women and young people in polling stations.

“The process was smooth and the voting equipment/materials used were sufficient and of good quality. In general, the polling officers had a very good knowledge of the voting procedures,” the mission said.

IOC said that in general the Seychelles’ parliamentary election from September 8-10 was held in a calm and peaceful atmosphere.

The Secretary General of the IOC, Madi Hamada, said the election is a testimony of the strong democracy that exists in Seychelles and the willingness of all politicians to work together for the interest of the country.

“Now starts a new cohabitation between a government and a parliament of opposing views. This is a sign of the vitality of the democratic culture,” said Hamada.

Created in 1982, IOC is an intergovernmental organisation comprising Reunion, a French department, the Comoros, Mauritius, Madagascar and Seychelles. Its headquarters is in Mauritius.

The election for the sixth National Assembly of Seychelles, an archipelago in the western Indian Ocean, saw the opposition coalition Linyon Demokratik Seselwa (LDS) win a majority for the first time in the country’s history.

The final mission report with recommendations will be presented to the Secretary General of the IOC.