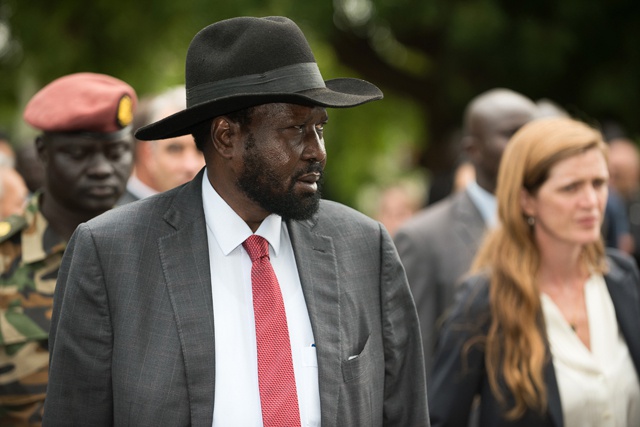 South Sudan's President Salva Kiir (C) walks with a high delegation from the United Nations (UN) Security Council, including US Ambassador to the United Nations Samantha Power (R) during a tour of the South Sudan's state house, known as j1, to show the damages of fightings at the state house from July, on September 4, 2016, prior to a closed-door meeting. (Charles Atiki Lomodong/AFP)

The council voted last month to deploy the 4,000-strong regional protection force (RPF) in Juba, which will be under the command of the UN peacekeeping mission.

The new force will help provide security in the capital and at the airport, and help protect UN facilities after Juba was rocked by heavy fighting in July.

Council members "call on the government to abide by the commitments it made and to translate them into concrete steps immediately," Van Bohemen said following the meeting.

"They called on the government to finalize with the United Nations the modalities for the deployment," he told reporters.

After initially opposing the force, Kiir this month agreed to the deployment during talks with council ambassadors who traveled to Juba for meetings with the leadership.

UN peacekeeping chief Herve Ladsous said the joint communique agreed between the United Nations and the Juba government on the deployment of the force "had not been acted upon at all".

Ladsous said it was now up to the council to decide on the next steps.

In the resolution, the council threatened to impose an arms embargo on South Sudan if the government blocks the regional force or impedes the work of UN peacekeepers.

US Ambassador Samantha Power said Kiir's government must quickly show that it will follow up on its commitment or it will face an arms embargo.

"If the government of South Sudan does not allow the regional protection force to deploy or does not allow the UN to move in a way that it needs to move to protect civilians, the United States certainly will support an arms embargo," Power told reporters.

But Russian Deputy Ambassador Petr Iliichev said Moscow does not support a ban on arms sales to South Sudan, arguing that it would not help advance peace efforts.

"The government is going to stop the cooperation" with the United Nations if an arms embargo is imposed, Iliichev said.

"It will get them deeper into the trenches."

UN Secretary General Ban Ki-moon told the council in a report last week that the first advance teams of the new force could begin arriving in Juba by the end of this month.

Ban said he would report to the council in October on whether South Sudan's government is cooperating.

If he finds it is not cooperating, that would trigger a vote at the council on the proposed arms embargo.

New Zealand's ambassador said the council was ready to consider "the appropriate next steps" including a possible arms embargo.

South Sudan descended into war in December 2013 after Kiir accused his former deputy Riek Machar of plotting a coup.

During the fighting in July, Machar, who had been persuaded to return to Juba to join a national unity government, fled the country and is now in Khartoum, having been replaced by Taban Deng Gai in Juba.

Aside from the tens of thousands of people killed in the conflict, the United Nations has reported shocking levels of brutality including gang rapes and the wholesale burning of villages.