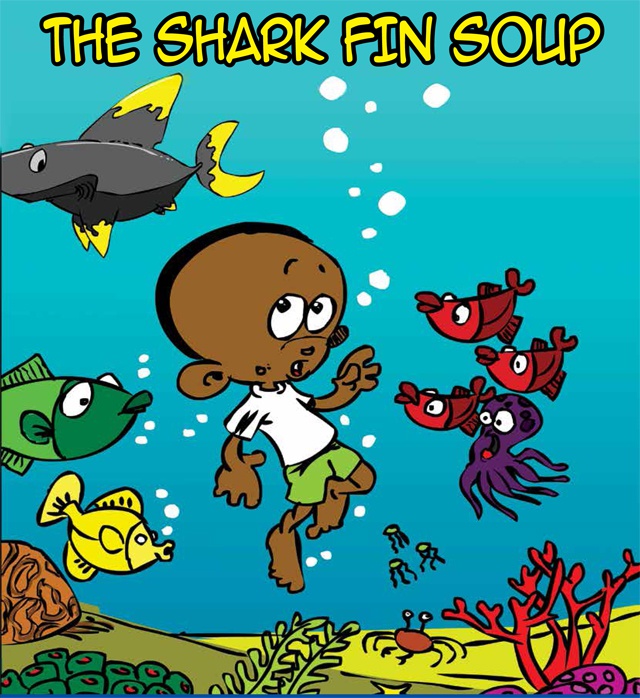 The cover of the comic book by Seychellois cartoonist Peter Lalande, aiming to raise awareness about sharks and finning -- one of the unsustainable practices that poses a threat to the species' population.

(Seychelles News Agency) - As shark finning and its associated threat to the shark population continues to be a global concern, one Seychellois has come up with a creative and colourful way to help raise awareness about the issue.

‘The Shark Fin Soup’ is the title of a comic book that cartoonist Peter Lalande is hoping will help educate islanders in Seychelles -- a 115-island archipelago in the western Indian Ocean -- about the dangers of unsustainable exploitation of the species.

“Sharks are beautiful species that we are rapidly losing to finning,” Lalande told SNA.

The book is but a small component of a wider project to educate the Seychellois population about sharks and to highlight the issue of finning.

In the 56-page publication launched earlier this year, Zak -- the main character -- tries to find the culprit behind shark finning in the Seychelles' waters.

“The character walks you through the adventure to tell a story and to educate, all in a fun way,” Lalande explained to SNA.

In the story, the fin hunter wanted to catch and rid a golden finned shark of its fins exposing an existing legend that if a man were to touch the fins of that special shark, he would become immortal.

“There is a myth saying that if you eat shark fins you will become stronger. To make the myth more interesting, I used the golden finned shark. The over exploitation of the species is based on an already false concept about the aphrodisiac quality of the meat,” said Lalande.

Shark Fin Soup is a popular delicacy in the Chinese kitchen. According to Lalande’s book a bowl of fin soup can be sold for as much as $100, while “one pound of dried fin can be retailed for $300 or more”

Lalande’s texts and illustrations are based on exchanges he had with fishermen who specialize in shark fishing, officials from the Seychelles Fishing Authority (SFA) and the Fishing Boat Owners Association (FBOA) as well as shark experts and conservationists in order to understand the problem and find the best way to relay the message.

The artist took over a year to write and illustrate the book, which also focusses on the importance of sharks to the marine ecosystem and the need for sustainable exploitation of the species.

The publication of the book is actually part of a wider project dubbed the ‘Shark Fin Soup’ project. This is a collaboration between the Fishermen and Boat Owner's Association (FBOA), the Seychelles Fishing Authority (SFA) and an environmental non-profit organisation Green Islands Foundation (GIF), which is not only targeting the general public but the fishermen themselves.

A series of workshops have already been organised on Mahe, the main island, as well as on the second main inhabited island, Praslin. Through such events the fishing communities are being briefed on the trend of shark catches in Seychelles, on the declining shark population and advised on sustainable practices.

The comic book comes in handy when dealing with younger islanders as they can get the message by reading the adventures of Zak with the sharks.

The whole initiative is funded by the Indian Ocean Commission SmartFish Programme, a regional fisheries programme funded by the European Union and co-implemented by the Food and Agriculture Organization of the United Nations.

The Shark Fin Soup project is also aimed at supporting the implementation of a four-year ‘National Plan of Action for the Conservation and Management of Sharks’ in Seychelles as the species has been found to be prone to over-exploitation.

Shark fishing has been practised in the Seychelles’ islands for centuries. The sharks are not only exploited for their fins, which are used for export, but also as a delicacy in the local cuisine in dishes like ‘satini reken’ (shark chutney)  and the ‘kari koko lapo latet reken’ (curry with coconut milk of the shark head flesh).

As a member of the Indian Ocean Tuna Commission (IOTC), Seychelles discourages shark finning although the practice is not illegal. Finning relates to the cutting of a shark’s fins while the rest of the carcass is discarded.

The Chief Fisheries Officer at the Seychelles Fishing Authority (SFA), Vincent Lucas told SNA that “the reason carcasses of finned sharks are dumped is because there isn't enough space on the [semi-industrial and industrial] vessels to store high number of whole sharks.”

He added that the practice is however not very common among artisanal fishermen in Seychelles as they make use of the whole shark when caught.

Lucas told SNA that shark finning used to be a more serious issue in Seychelles over the past years but has seen a drop in exported fins.

Nearly $190,000 worth of shark fins were exported from Seychelles in 2012 but the figure dropped to $41,000 in 2014, according to figures from the Seychelles Fishing Authority.

Research compiled for the National Plan of Action for the Conservation and Management of Sharks shows that “the price of shark fin on the local market collapsed in 2014 (approximately 90% decline in value) following the decision of key airlines servicing Seychelles to no longer accept dried fins as freight.”