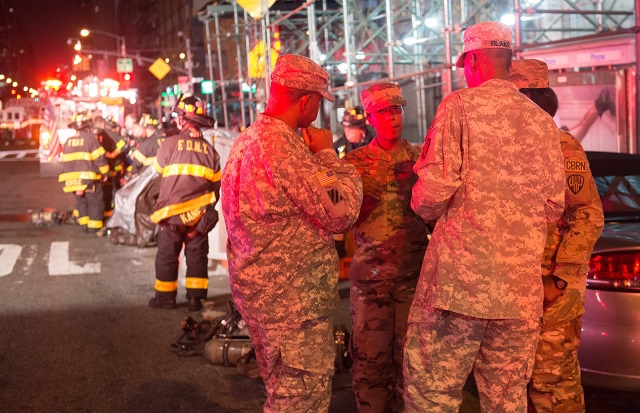 Fire fighters and other first responders stand near an alleged explosion on West 23rd Street on September 17, 2016, in New York. (Bryan R. Smith/AFP)

(AFP) - A deliberate explosion rocked an upscale and bustling neighborhood of New York on Saturday night, injuring 29 people, one seriously, a week after America's financial capital marked the 15th anniversary of the 9/11 attacks.

The explosion occurred in Chelsea at around 8:30 pm (0030 GMT Sunday) outside 131 West 23rd Street, at what is usually a busy time of the weekend in an area packed with bars, restaurants and luxury apartment blocks.

Mayor Bill de Blasio and the city's brand-new police commissioner said there was no known link to terror at this stage, scrambling to reassure the city's 8.4 million residents that there was no specific threat.

"There is no evidence at this point of a terror connection to this incident, this is preliminary information," de Blasio told reporters.

"There is no specific and credible threat against New York City at this point in time, from any terror organization," the mayor said.

President Barack Obama was "apprised" of the explosion and will receive updates on the situation as they become available, a White House official said.

Of the 29 people wounded in the incident, 24 have been taken to hospitals with various degrees of scrapes and abrasions from glass and metal, said Fire Department commissioner Daniel Nigro.

Witnesses living three blocks away in what is one of the most fashionable districts of Manhattan told AFP they heard a large boom from their fifth floor apartment, followed by quiet, then the sound of sirens.

An AFP journalist at the scene said police had sealed off the area and shut down the closest subway station. Police helicopters circled overhead.

The mayor said it was not immediately apparent if the blast was connected to a pipe bomb explosion hours earlier in a trash can in New Jersey.

The blast occurred in Seaside Park during a Marine Corps charity run. It caused no injuries but forced officials to cancel the event.

There were up to four timed explosives but only one detonated, Al Della Fave, a spokesman for the Ocean County prosecutor, told CNN.

But in New York, officials were tight-lipped on the cause of the blast, saying it was still under investigation but confirmed it had not been a gas leak.

"We believe it was intentional. As soon as we're able to determine what specifically caused this explosion, we will report it to you," de Blasio said.

"I want to assure all New Yorkers that the NYPD and all other agencies are at full alert and that our anti-terror capacity in particular is at full alert," he said.

The city, which is America's entertainment and financial capital, already has stringent security checks in place at public buildings and routinely goes on alert following militant attacks in other US cities or in Europe.

FBI and counter-terrorism units were among those who deployed to the scene Saturday, officials confirmed.

James O'Neill, who took over as New York police chief only on Saturday after veteran commissioner Bill Bratton resigned, described the explosion as "large" and said it happened outside 131 West 23rd Street at 8:30pm.

The building has not been evacuated but an "extensive search is being conducted," O'Neill told the news conference.

Police said they were investigating a possible secondary device four blocks away from the scene of the explosion, on 27th Street.

Casualties as explosion hits largest US base in Afghanistan: NATO