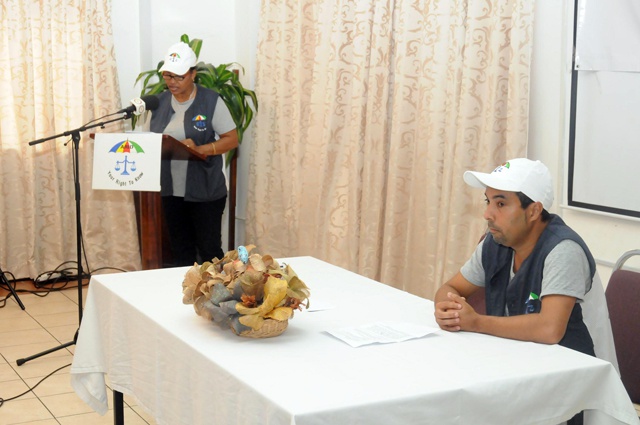 The Association for Rights, Information and Democracy (ARID) on Tuesday presented its key recommendations after observing the pre-election phase, voting, counting and announcing of results of the September 8 to 10 vote. (Louis Toussaint, Seychelles News Agency)

(Seychelles News Agency) - The Electoral Commission should come up with a new voters’ register and also conduct a voter census to ensure a credible electoral list, a Seychellois observer mission said on Tuesday.

The Association for Rights, Information and Democracy (ARID) presented its key recommendations after observing the pre-election phase, voting, counting and announcing of results of the September 8 to 10 vote.

The chairperson of ARID, Lucianne Sofola-Bristol who presented the report said that the group is of the view that the voters register is “significantly inflated.”

“When one is to compare the population figures (from national bureau of statistics) and the numbers on the voters register; can it be possible that there are over 71000 persons of 18+ plus years,” said Sofola-Bristol.

ARID has also expressed concern with regards to the level of confidence and credibility in the Electoral Commission which it said “compromises the integrity” of the body.

On the question of the new alphabetical ordering system of voting, Sofola-Bristol noted that it did not work out well in some instances, as some alphabetical lines were a bit slow hence making the queues longer than others.

ARID which deployed some 35 observers to polling stations on the three main islands -- Mahe, Praslin and La Digue, as well as to some of the special stations on the outer islands, also highlighted the mental state of voters.

“Mental state of “eligible” voters must be assessed before they are allowed to vote. ARID members have witnessed far too many voters being forced to come down to vote against their will,” said Sofola-Bristol.

The September vote was ARID’s second time monitoring an election on home soil, having been accredited ahead of the December 2015 presidential election. The group has reiterated a call made following last year’s election for the introduction of transparent ballot boxes “to boost the confidence of electorates.”

The 14 recommendations set out in the report also include a call for military and other law enforcement officers to refrain from voting in their uniforms saying that this can be seen as a form of intimidation, and for government resources including transport not to be used to carry people to vote.

ARID has also recommended that the Electoral Commission considers introducing biometric cards for voters, establish a mechanism for election disputes, increase the capacity and resources for larger electoral areas and to have a working group to relook and address the “gray areas in the elections Act.”

Generally, Sofola-Bristol said the observer mission found that the electoral process was conducted in a free, transparent, peaceful and tolerant manner and in accordance with the laws of Seychelles.

“We are of the view that citizens were generally free to express their choice through universal, adult suffrage but some hiccups here and there in some districts and from weaknesses in our election management body affected the trustworthiness,” she said.

Sofola-Bristol said the challenges that emerged during the recent parliamentary elections mean that there is room for improvement before ARID can call any election credible and fair.

ARID which was one of two Seychellois observer missions that monitored the vote, will publish a final report detailing its findings and recommendations on October 10.

An opposition bloc, Linyon Demokratik Seselwa (LDS) won 15 direct seats while Parti Lepep, which has maintained a majority in the National Assembly since 1993, won 10 direct seats.

Both LDS and Parti Lepep have won four proportionate seats in the 33-seat parliament.

The sixth National Assembly will be sworn in next Tuesday.