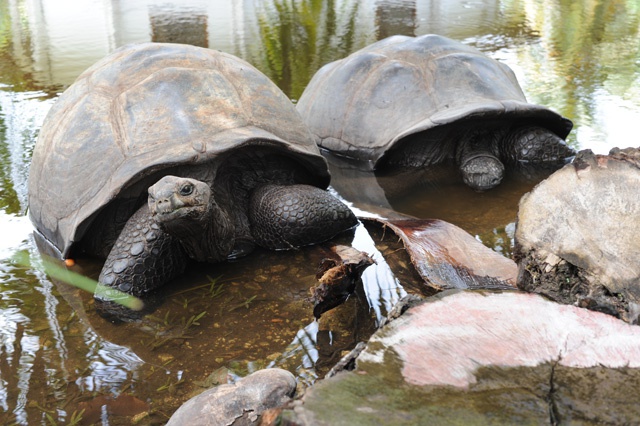 As the concept of eco-tourism gains hold, a growing number of visitors are coming to the Seychelles with the specific intention to see as much as possible of the Seychelles’ unique biodiversity. (Chris Raxworthy, AMNH)

(Seychelles News Agency) - In March next year, when New York will still be in the grip of winter, a special expedition will be making its way over to the tropical Seychelles islands. The American Museum of Natural History will be bringing museum patrons to the Seychelles for an up-close encounter with the island nation’s amazing rainforests and coral reefs.

The majority of the tourists who visit Seychelles, a 115-island archipelago in the western Indian Ocean, come seeking sun, sea, sand and romance - a promise delivered upon by the archipelago’s powder-white beaches, clear turquoise seas and luxury resorts.

However, as the concept of eco-tourism gains hold, a growing number of visitors are coming to the Seychelles with the specific intention to see as much as possible of the Seychelles’ unique biodiversity.

That is exactly what the American institution is offering its patrons and their families -- a chance to see this tropical getaway, through the eyes of a scientist.

The American Museum of Natural History in New York City is one of the most famous museums in the world. Spun into legend for children as the magical setting for the ‘Night at the Museum’ movies starring Ben Stiller, the museum’s exhibits have come to life to millions across the world.

Aside from its collection of some 33 million specimens of plants, animals, fossils, minerals, rocks, meteorites, human remains, and human cultural artifacts, the museum also offers members of its Patron’s Circle the chance to actually go on real-life expeditions to far-flung locations, led by the museum’s curators and research experts.

Elizabeth DeGaetano, Associate Director, American Museum of Natural History Expeditions, told SNA in an email interview that the expedition will offer nature walks during the day and at night, snorkeling and birdwatching as well as meetings with local scientists to learn more about animal behavior, evolution, biodiversity, and habitat restoration and conservation.

The itinerary will include a trip to the nature reserves on the islands of Silhouette, Aride and Cousin, the UNESCO World Heritage Site of the Vallee de Mai on the archipelago’s second largest island of Praslin, the Saint Anne Marine Park and the Morne Seychellois National Park on the main island of Mahe.

“There already is a lot of interest in the program and we hope to have a full trip with 25 participants,” said De Gaetano.

The visitors can expect to get up close and personal with some endangered hawksbill turtles and Aldabra giant tortoises, try to spot some of the Seychelles’ rarest endemic birds such as the Seychelles Black Parrot and marvel at the wonder of the world’s largest seed, the endemic coco de mer.

Few visitors from North America make it to the shores of Seychelles simply because of the sheer distance, many settling instead for Caribbean islands as a closer alternative.

According to the latest visitor arrival information from the Seychelles Bureau of Statistics, 4,420 tourists from the United States visited the Seychelles so far in 2016, just over 2 percent of the total of almost 208,000 visitors, the majority of whom were from countries such as France, Germany and the United Arab Emirates.

DeGaetano is hoping participants in the upcoming expedition will ultimately gain “an appreciation for the wildlife, geology, and local culture of the Seychelles and how the Museum partners with local researchers in the pursuit of scientific discovery.”

The American Museum of Natural History has been offering educational travel opportunities to its members since 1953.

DeGaetano said to SNA that the expeditions are one of the many ways the museum delivers content-rich experiences of human cultures, the natural world, and the universe to its membership.

“Every trip is designed and led by one or more museum scientists, highlights our current research and scientific expeditions, and provides unique access to local experts and institutions,” said DeGaetano.

“On our family programs, a museum educator coordinates with the scientist to create and lead fun learning experiences that inspire youngsters and adults alike.”

Dr Chris Raxworthy, who will be making the trip to Seychelles, is the museum’s curator-in-charge of the Department of Herpetology. He has studied amphibian and reptile evolution and conservation, mainly in Madagascar, where he has worked since 1985.

Dr. Raxworthy also led the Constantine S. Niarchos Expedition in 2013, a survey of the Seychelles island system and Mascarene Islands that provided valuable data about the distribution of endemic and introduced reptiles. The information his team collected is helping researchers learn more about what happens in an ecosystem after extinction, and how reptile communities are rebuilt.

In addition to the family-oriented Seychelles expedition, the museum will also offer family expeditions to tour the decorated caves of Spain and France, experience a total solar eclipse at the National Parks of Wyoming and journey to South Africa to explore evolution of humankind and view the Universe with the South Africa Large Telescope (SALT).

Boot camp in conservation offered on island in Seychelles