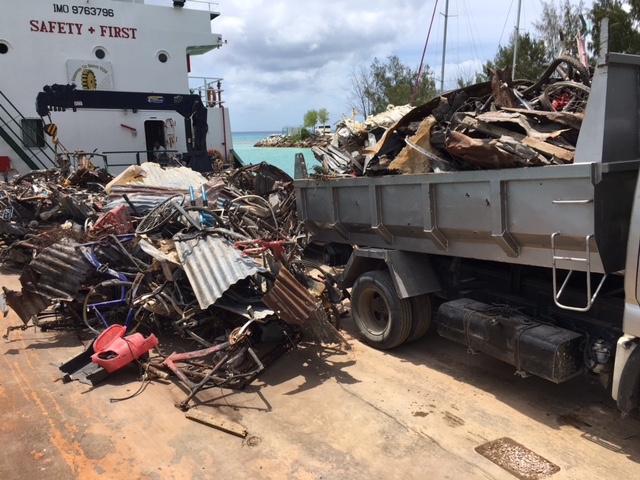 During a global clean-up event earlier this month, 450 tonnes of waste was collected on La Digue. (Marc Francois, Landscape and Waste Management Agency)

(Seychelles News Agency) - With nearly every one of the 3,000 residents on the island of La Digue owning a bicycle or two, the island is struggling to cope with its accumulating scrap metal.

“Metals makes up most of the waste that is collected on a daily basis on the island,” Seychelles Land Waste Management representative Marc François told SNA.

During a global clean-up event earlier this month, 450 tonnes of waste was collected on the island, which is about 5 kilometres long and 3 kilometres wide.

Francois said, “Bicycle parts, electronic devices and other hardware remains the bulk of what we collected during the three-day campaign.”

La Digue, the third-most populated island of Seychelles, an archipelago in the western Indian Ocean, has only one dumping site located at ‘L’Union Estate.

“Due to the high cost, we try to do so every year,” says François.

The manager of Samlo, one of the companies that collects and exports scrap metal, said the company collected over 70 tonnes from La Digue during the three days. All scrap metals were transported by boat to the Mahe, the main island and taken to the company’s yard at Providence, on the eastern coast, said the manager, Vijay Armoogum,.

Around 200 tonnes of scrap metal were also collected on Mahe, the most populated island of Seychelles, last week.

Jothinathan Naidoo of Surya Enterprise another company that collects and exports scrap metal, said he has noticed an increase in scrap electronics like fridges and cookers and said, “Most probably the items are not of high quality.”

The Clean Up the World campaign, an annual global event that takes place in September, encourages inhabitants of Seychelles to dispose of their accumulated waste during the three-day period.

The Seychelles Sustainable Development Strategy (2012-2020) states that the 93,000 inhabitants of the island nation generate about 48,000 tonnes of waste per year, and most of it ends in the landfill.

According to a provisional study of Seychelles’ landfill, plastic wastes account for 33 percent of all wastes in Seychelles.

The island nation has recently embarked on a plastic-free campaign which could result in less waste for the next global clean-up campaign.