Tourism and trade to increase through Seychelles-Finland air service agreement 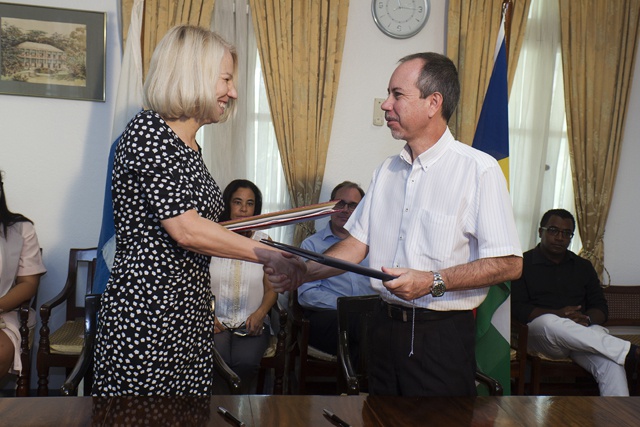 (Seychelles News Agency) - The tourism and trade industries in Seychelles and Finland will benefit from direct air access for the first time through the signing of an agreement on Friday.

The agreement will ease connectivity between the two countries through direct flights by designated carriers, officials said. It was signed by the Seychelles Minister for Foreign Affairs and Transport Joel Morgan and the Ambassador of Finland Tarja Fernandez.

Speaking to reporters, Fernandez said, “This is a very concrete way to strengthen relationships between our two countries. Although Finland is far away in the north, Finish tourists are keen to come to Seychelles.”

Seychelles foreign minister Morgan said, “As of July we have already welcomed 350 visitors (from Finland). Through this agreement, we have the potential to increase that number significantly.”

Morgan said that last year’s statistics showed that around 700 Finish tourists visited the 115-island archipelago in the western Indian Ocean.

The air service agreement is expected to increase Seychelles' visibility as a hub in the Indian Ocean as the country will become an intermediate point for tourists travelling to other Indian Ocean countries.

Morgan said that trade and commerce figures are low between the two countries and that they could be improved upon.

“I think there are potentials [in Finland] for things like fresh products,” said Morgan.

With the newly signed agreement, Seychelles will have better access to northern European markets. Both Fernandez and Morgan agreed that businesses stand to benefit.

Seychelles depends largely on tourism, which is the top pillar of its economy. Figures from the National Bureau of Statistics (NBS) in August this year, show that the number of visitors from Europe in 2016 has increased by 9 percent compared to last year.