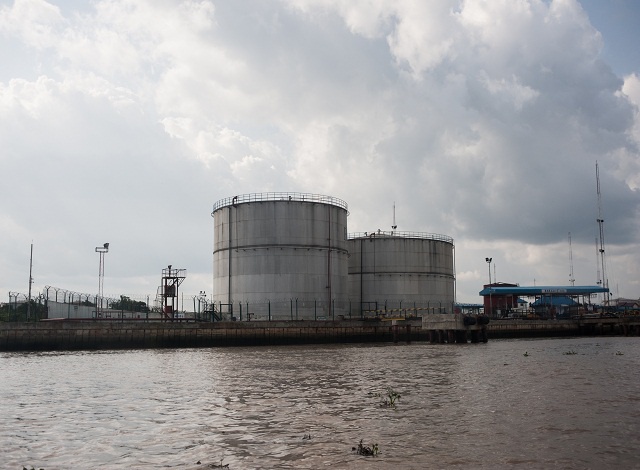 This picture taken on June 8, 2016 shows a fuel storage facility in Warri, Delta State on June 8, 2016. The oil rich Delta region in Nigeria has seen the rise of a new militant group that has vowed to cripple the economy, due to the actions of the Delta Avengers Nigeria’s oil production has dropped to a 20-year low drastically affecting economy. (STEFAN HEUNIS / AFP)

(AFP) - Chevron and Total on Friday failed to convince a court to throw out a case which implicates them in the alleged failure to declare billions of dollars in crude exports from Nigeria.

The US and French companies are among up to 15 oil majors reportedly targeted by the Nigerian government, which claims the practice lost it $17 billion ($15 billion) in revenue between 2011 and 2014.

A judge at the federal high court in Lagos dismissed the firms' applications for lack of merit after hearing arguments from both sides and adjourned the case until October 25.

Prosecutor Fabian Ajogwu told reporters outside court that the dismissal indicated there was "a course of action for the federal government".

Nigeria's President Muhammadu Buhari came to power in May last year, promising to tackle endemic corruption and recover what he said were "mind-boggling" sums of stolen public money.

Buhari's government then commissioned US auditors to compare the number of barrels of oil declared for export in Nigeria with those declared for import in the United States, China and Norway.

Court papers seen by AFP said the report concluded that one of "the major reasons for the decline in the revenue from crude oil exploration was due to undeclaration and under-declaration of crude oil shipments made by some major oil and gas companies".

The first case centres around the alleged non-declaration of some 57 million barrels worth $12.7 billion to the United States by the Nigerian subsidiaries of Total, Chevron and Italy's Eni.

The court papers for Friday's case only mention Total and say the government wants $245 million in damages and interest, with 21 percent interest for every year of revenue lost.

Eni said: "The claim dates back to last March and refers to a request to our subsidiary in Nigeria (Agip) for a payment of about $160 million."

Chevron said it would not be commenting as the court case was active.

But according to a source familiar with the case, the oil companies would prefer not to be in direct conflict with the Nigerian government at the present time.

They also said they were confident the accusations would be found to be baseless.

"You have to explain to the government that it's not the right time to discourage foreign investors," said one employee of a major firm, who asked to remain anonymous.

According to OPEC figures published in August, Nigeria produces some 1.5 million barrels per day (bpd), compared to 1.78 million for Angola.

Nigeria has seen a 21.5 percent drop in production since January -- the equivalent of 41,300 bpd -- mainly because of renewed attacks on oil and gas infrastructure in the delta region.

The repeated attacks on off-shore installations and strategic pipelines have exacerbated a serious economic crisis sparked by the sustained fall in global oil prices since mid-2014.

Revenue has dwindled, given that Nigeria relies on oil export sales for more than 70 percent of government income.

The crisis has seen the naira currency plunge in value, foreign exchange dry up and inflation soar, while foreign investments slumped 75 percent year-on-year in the second quarter.

"No-one can lift 400,000 barrels (of oil) and say they lifted 300,000 without political connections," said Dolapo Oni, an energy consultant with Ecobank Group.

"Looks at the dates. It's targeted against the previous government."

Buhari's anti-corruption crusade has seen a number of high-profile figures from the previous adminstration of president Goodluck Jonathan arrested and put on trial.

But with most of them from Jonathan's Peoples Democratic Party (PDP), the opposition has accused Buhari of conducting a political witch-hunt.

Ecobank's Oni said in Nigeria, there is room for negotiation on the number of barrels exported because of a lack of specific measurement tools.

"In Saudi Arabia, you can see what's being lifted. This is a major issue. This is market bargaining over billions of dollars," he added.

"These companies can stay in court for years. They (the government) might not carry on with the court case. But they will want to negotiate their debts over these accusations."