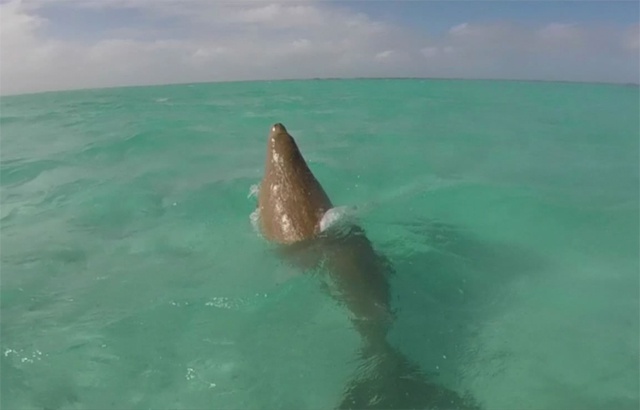 Photo of a dugong sighted by conservationists working on Aldabra. (Terence Mahoune/SIF)

(Seychelles News Agency) - Nine separate sightings of dugongs within the space of a month have left conservationists working on the Aldabra atoll filled with hope that the rare mammals may decide to return to the Seychelles.

Dugongs -- sometimes called sea cows, and similar to manatees -- are shy and gentle creatures that survive solely on a diet of seagrass. They were hunted and slaughtered by early settlers and sailors to the islands for their meat and oil.

Once a common sight throughout the archipelago of 115 islands, they disappeared entirely from view in the region. But a few may have escaped to the isolated refuge of Aldabra and the nearby islands surrounding Madagascar.

One of the furthest-flung group of islands in the Seychelles archipelago, the Aldabra atoll is one of the most remote and difficult places to access, even for citizens of the island nation. The area is a special nature reserve protected by the Seychelles Islands Foundation (SIF), and only conservation officers, scientific researchers and a few very carefully selected visitors are allowed on the ring of coralline islands with its shallow central lagoon.

According to the SIF, between July and August this year the team working on Aldabra reported nine separate dugong sightings, the highest number of opportunistic sightings recorded annually since the Aldabra research station was established in the early 70s.

The SIF hopes that the increased number of sightings indicates that Aldabra’s dugong population is increasing, and several observations of female dugongs with juveniles in Aldabra’s lagoon suggest that the site plays an important regional role as a dugong breeding and nursery area.

According to SIF’s communication officer Rowana Walton, the first documented sighting of a dugong in recent years at Aldabra was in 1970 by boat. Sightings since then were incidental and sporadic, with no sightings for decades after this.

“Even if the dugongs are reproducing at Aldabra, which is not confirmed, as a long-lived and slow growing species it would take many years for the population to increase in the protected area,” Walton told SNA.

Dugongs are a migratory species, and are capable of travelling great distances across the ocean. However, within the Western Indian Ocean region as a whole, dugong populations have declined rapidly and face a multitude of threats when not in the protected waters of Aldabra. And like many other wild animals, dugongs can be affected by human activity.

“If the dugongs at Aldabra are migrating from the east coast of Africa, there they are faced with a number of direct and indirect threats from humans - and boats - which would of course make them wary of any human or boat activity at Aldabra as well,” said Walton.

“Saying that, the staff at Aldabra have had several dugong encounters which have lasted several minutes with the dugongs apparently unconcerned by their presence,” she added.

While it could be possible that the dugongs encountered at Aldabra are becoming more used to the presence of boats, Walton says it could also be possible that there has been an increase in population size, meaning that the likelihood of rangers and researchers bumping into the creatures is higher.

Without further research to determine the current population size, Walton says it is difficult to know which of these explanations would account for the increased sightings.

“It is likely that the extensive seagrass beds of Aldabra could support a larger number of dugongs, however, further data on the dugongs' movements and habitat use would be needed in order to establish the carrying capacity for this species at Aldabra,” she told SNA. “We hope that projects we have planned in the future will shed light on this exact question.”

During a dedicated aerial survey conducted in 2013, researchers put the total number of dugongs in the atoll between 14 and 20 individuals.

In 2014, SIF announced a multi-partner regional project, led by the Association for the Conservation and Protection of Dugongs and Marine Mammal Species, to research and conserve dugongs, and their role in this partnership is to undertake surveys to assess the status of Aldabra's dugong population.

SIF hopes to carry out its next survey of the dugong population at Aldabra by the end of 2017, but whether these research activities will be carried out or not depends on funding.

“[We] have been waiting to secure additional funding from another source in order to make the best use of the resources and ensure a successful outcome,” said Walton.

Species » Be a reporter: Write and send your article » Subscribe for news alert
Tags: Seychelles Islands Foundation, Aldabra, dugongs, conservation, sightings, Association for the Conservation and Protection of Dugongs and Marine Mammal Species