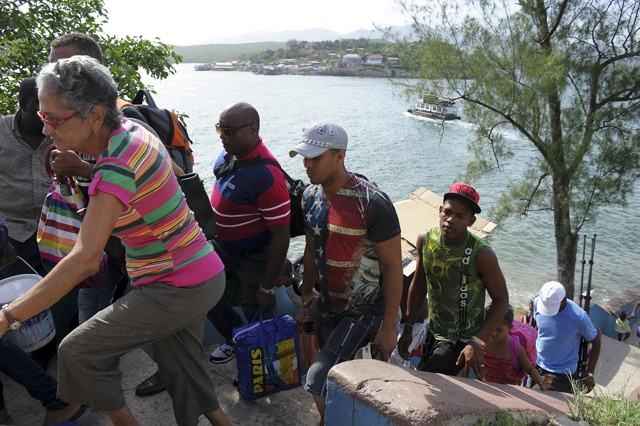 Residents of Granma Island are evacuated due to the proximity of Hurricane Matthew in Santiago de Cuba on October 2, 2016. (YAMIL LAGE/AFP)

(AFP) - Hurricane Matthew powered toward densely populated Jamaica and Haiti on Sunday, unleashing winds that could fell homes and power lines and torrential rain that may trigger potentially deadly landslides and floods.

As the powerful storm churned north, dozens of people were trapped on cays -- tiny islands -- off the coast of Jamaica's main island, officials said.

In Jamaica and elsewhere, authorities scrambled to protect buildings and shelter residents. Jamaicans waited in long lines in stores and at gas stations to stock up. Both airports in Haiti closed.

Jamaica started warning people to evacuate and prepare two days ago. But some on the islands "said they would rather stay to protect their interests," Minister of Local Government Desmond Mackenzie told reporters.

He said the Jamaican Defence Force tried to bring them back to the mainland, but they refused gasoline for their boats and dug in.

The government was not prepared to risk the lives of first responders as they have been warning people of the danger since Thursday, Mackenzie said.

"No turning back now. It is a matter of how long we have to wait this out," he said.

Its movement edged up to five miles per hour as it churned up from the Caribbean coasts of Colombia and Venezuela.

In Cuba, President Raul Castro traveled to the southeastern city of Santiago to oversee emergency operations.

Matthew had the potential to become a storm for the ages, he warned residents.

"This is a hurricane it's necessary to prepare for as if it were twice as powerful as Sandy," the Cuban leader said, referring to the megastorm that hit with massive destructive force in 2012.

Officials at the US naval base in Guantanamo Bay, Cuba announced a mandatory evacuation for all non-essential personnel and family members.

On its current track Matthew's center will sweep past Jamaica on Monday, dumping heavy rain as it makes landfall on Haiti.

Thousands are still living in tents in Haiti after the country's massive 2010 earthquake. Erosion is also especially dangerous in Haiti because of high mountains and lack of trees and bushes in areas where they have been cut for cooking.

Matthew is then expected to continue north, tearing across southern and eastern Cuba between Monday and Tuesday as it marches toward the Bahamas.

Forecasts predict the hurricane will dump 15 to 25 inches (40-60 centimeters) of rain over southern Haiti with possible isolated maximum amounts of 40 inches.

"This rainfall will likely produce life-threatening flash floods and mudslides," the NHC warned.

In Jamaica, minister McKenzie said that the army and military reserves were called up to help deal with hurricane damage.

Buses were also being sent to flood-prone areas to move residents to shelters.

US embassies in Jamaica and Haiti were set to close Monday and Tuesday due to the storm.

In Haiti, more than 500 people were evacuated Sunday as a precaution from Jeremie, in the southwestern part of the country. Some of them were reluctant to leave, civil protection officials said.

The poorest country in the Americas is home to almost 11 million people, many living in fragile housing.

America's Accuweather website warned meanwhile that Matthew could hit the US East Coast around midweek.

"How significant impacts are along the Atlantic Seaboard will depend on Matthew's strength and proximity to the coast," it said.