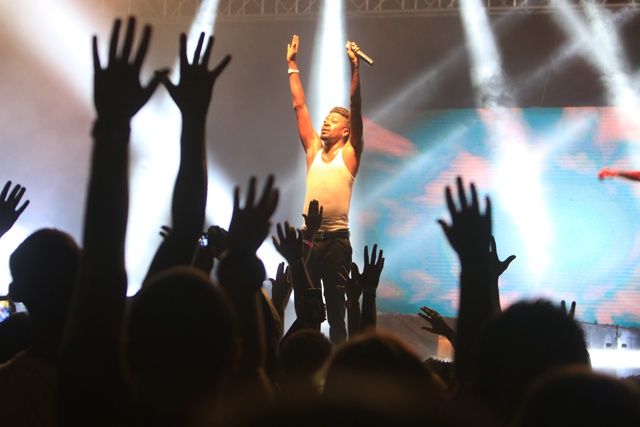 The Grammy-award winner brought the crowd back to the 1990s by singing some of his popular hits such as ‘Who am I,’ ‘Girls Dem Sugar,’ and ‘Romie’ in addition to giving them a taste of his latest album released last month. (Joe Laurence, Seychelles News Agency)

(Seychelles News Agency) - Jamaican artist Beenie Man got fans in Seychelles cheering to his dancehall and reggae tunes for the first time in the island nation over the weekend.

Beenie Man kept his appointment with local fans after his concert originally planned for August was cancelled by local promoters over a health scare. The artist had announced on his Instagram account that he had contracted the Zika and Dengue virus.

The Grammy-award winner brought the crowd back to the 1990s by singing some of his popular hits such as ‘Who am I,’ ‘Girls Dem Sugar,’ and ‘Romie’ in addition to giving them a taste of his latest album released last month.

Beenie Man, 43, said he was struck with the beauty of the Seychelles islands, which he said reminded him of home.

“Seychelles is beautiful, very, very beautiful. It is like a part of Jamaica that we call Port Antonia with all the mountains,” he told journalists.

The show in the Seychelles capital, Victoria, on Saturday also saw the participation of local artists, including Barry Barra known as Ambitious to local fans, who also joined Beenie Man on stage.

Interestingly, Beenie Man featured on ‘Woman mi Favour’ one of Ambitious’ songs found on his first album, released in 2004.

Fans who turned up had mixed reactions on the Beenie Man concert, which was one of the most anticipated musical show of the year, following recent performances by a string of Jamaican artists from the likes of Konshens, Charlie Black and Demarco.

“The turnout was very poor but the show was quite okay although he did not interact much with the public,” Catherine Pilate said to SNA.

Wivine Malulu on the other hand, although disappointed that the artists did not sing that many songs, felt that “when he sang though the songs were awesome.”

Jude Hoarau, 45, was one who reminisced his days as a teenager listening to some of the Beenie man tracks played on Saturday.

“The show was great. It brought me back to a time when I was a teenager and Beenie Man was becoming popular with his music,” said Hoarau, who was not bothered by what he described as a low turnout for the show.

Beenie Man, born Anthony Moses Davis, began his musical career in 1981. Speaking to Seychellois journalists he explained that his stage name derives from what his grandfather used to call him when he was still a young child.

“I was very inquisitive as a child and I wanted to know everything that the elders knew," he said. "So my grandfather called me Beenie Man because he said I was a big kid in a little kids’ body, this is how the name came about.”

Beenie Man has collaborated with several well-known artists including Nicki Minaj, Janet Jackson and Lady Saw. One of his greatest achievements was in 2001 when he won the Grammy Award in the Best Reggae Album category for his album titled "Art and Life."

The Jamaican rapper released a new album in August -- ‘Unstoppable’ – his first album in 10 years, which he said was not an easy thing to do, as he wanted his independence from record labels.

“Every time I called somebody to say I want to start an album, they wanted to sign me and not the album, so it took me 10 years to find somebody who  actually wanted to put out an album with me and not sign me,” said Beenie Man.

The Jamaican artist left Seychelles on Sunday and indicated he might be back one day to perform again.