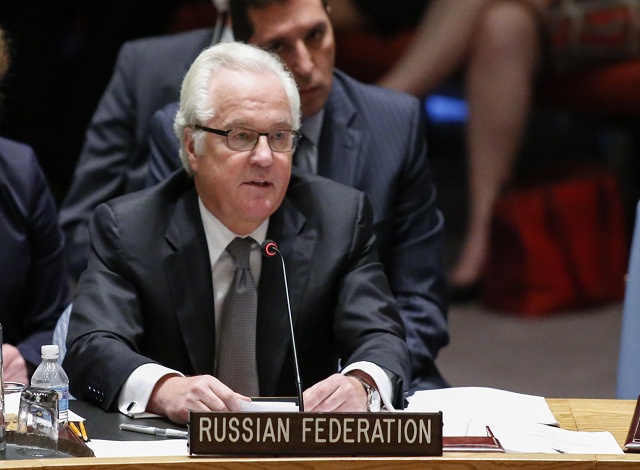 Vitaly Churkin Russian Ambassador to the United Nations speaks during a Security council meeting at the United Nations Headquarters in New York. Russia said Monday that it would like to see a woman as the next UN secretary general and would back a candidate from Eastern Europe, days after Bulgarian Kristalina Georgieva entered the race.(AFP PHOTO/ KENA BETANCUR )

(AFP) - Russia said Monday that it would like to see a woman as the next UN secretary general and would back a candidate from Eastern Europe, days after Bulgarian Kristalina Georgieva entered the race.

"We do believe that it is the turn of Eastern Europe to provide the next secretary general," Churkin told a news conference, adding: "We would very much like to see a woman."

His comments came less than a week after Bulgaria switched candidates for the position, putting forward Georgieva, the European budget commissioner and a former World Bank vice president.

The Bulgarian economist appeared before the UN General Assembly on Monday, fielding questions during two hours on everything from the war in Syria to the refugee crisis and climate change.

The contest for UN chief will head into new territory on Wednesday, when the five permanent council members -- Britain, France, China, Russia and the United States -- are set to vote in the race's latest straw poll.

They will use colored ballots to indicate whether the candidates would face a veto when the council moves to a formal vote.

Churkin said there was "a good chance that a few days after" Wednesday's straw poll, the council will formally vote to pick a nominee, who will then be presented to the General Assembly for approval.

Georgieva would be the first female UN chief.

She came into the fray after the Bulgarian government withdrew its support for UNESCO head Irina Bokova after she failed to make a strong showing in the polls.

However, she has remained in the race and will also be on the ballot on Wednesday.

During the hearing, in which she also made remarks in French and Russian, Georgieva touted her experience at the World Bank and the European Commission, stressing that she is results-driven.

"Our problem in the world today is that goodness is quiet," Georgieva told a packed UN hall. "Hate is very loud. You can hear it everywhere."

"Should I be selected to be secretary general, my job would be to amplify the voice of goodness."

On Syria, now in its sixth year of war, Georgieva said the raging conflict showed the importance of conflict prevention.

"We failed to see the warning signs of how bad it was going to be," she said.

Addressing the refugee crisis is "not only morally right but in all our interests."

She reserved perhaps her harshest words for the cholera outbreak in Haiti, saying the United Nations had been "dragging its feet" over recognizing the problem caused by UN peacekeepers.

The poor handling caused "unnecessary suffering and loss of life", Georgieva said, but praised Ban for taking steps to correct the situation with a new multi-million-dollar fund to help victims.

The 63-year-old is now facing off against nine other candidates who have been campaigning for months.

Portugal's former prime minister Antonio Guterres is the frontrunner so far after taking the number-one spot in all five of the Security Council's straw polls.

The new secretary general will begin work on January 1.