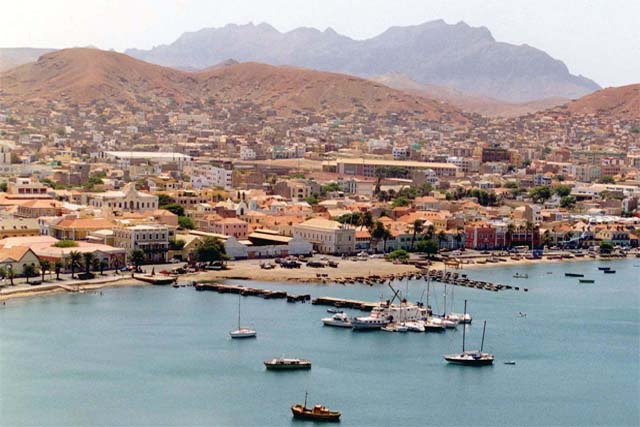 The view over Mindelo harbour on the island of São Vicente in the archipelago of Cape Verde off the west coast of Africa (Wikimedia)   Photo License: (CC BY-SA 3.0)

(Seychelles News Agency) - African islands are capable of setting an example in terms of sustainable development, especially in light of 2014 being designated the year of Small Island Developing States by the United Nations. This is the view of Seychelles’ Foreign Affairs Minister, Jean-Paul Adam, who is currently in the West African island nation of Cape Verde on an official visit to his counterpart, the Cape Verde Minister for External Relations, Jorge Borges.

According to a statement released this morning by the Seychelles Ministry of Foreign Affairs, the visit is also a preparatory exercise for the visit of the Cape Verde head of state, President Jorge Carlos Fonseca, to the Seychelles archipelago on the upcoming Seychelles National Day on 18 June, the 21st anniversary of Seychelles’ return to multiparty democracy.

Seychelles and Cape Verde, although on opposite sides of the continent of Africa, display striking similarities and are faced with similar economic challenges and have often referred to each other’s experiences when considering new policies.

“Seychelles and Cape Verde are naturally aligned as two countries that have put sustainability and good governance at the heart of their development efforts,” says Adam in the statement.

“We also share concerns that existing international development frameworks do not match the specific vulnerabilities of island states.  And we are also united in our efforts to ensure that continental integration measures fully take into account our situation as insular African island States.”

Minister Borges has previously expressed his country’s keenness to resume cooperation with Seychelles. “We should give great importance to those African island countries that have the same objective as we do, hence the reason for the enhancement of cooperation and diplomatic ties with Seychelles,” he said.

Cape Verde has a population of over 500,000 people spanning an archipelago of 10 volcanic islands located 570 km off the coast of Western Africa in the Atlantic Ocean. Previously uninhabited, Portuguese explorers colonized the islands in the 15th century, using it as a strategic point from which to ship slaves taken from the Western African region.

Despite its grim history, the present-day Cape Verdean economy is mostly service-oriented with a growing focus on tourism and foreign investment. Similarly to Seychelles, the islands of Cape Verde boast an all-year-round warm climate with rich cultural heritage, cuisine and music. However, both countries have to import over 90% of all food due to a lack of available land for agricultural purposes.

Struggling with rising debt levels, Cape Verde has made great strides to stabilize the economy by building up national currency reserves to 3.5 months of imports. Unemployment has been falling rapidly, and the country is on track to achieve most of the UN Millennium Development Goals.

After joining the World Trade Organization (WTO) in 2007, the country was soon given a step up in development rankings from Least Developed Country (LDC) to Middle Income Country (MIC) status.

According to the Ministry of Foreign Affairs, Ministers Adam and Borges have explored the possibility of creating partnerships between their respective tourism sectors, and expressed support for African Union members to collaborate on building an “African brand” of tourism, without adding additional taxes to the tourism sector.

Minister Adam also praised Cape Verde’s success in implementing renewable energy, with over 30 percent of the population’s energy requirements met from renewable energy sources and has ambitious plans to raise that to 100% by 2020.

After visiting the wind farm of Cabeólica, an award-winning public-private partnership situated just outside the capital city of Praia, it was agreed by both ministers to strengthen cooperation between the Seychelles Energy Commission and its counterpart authorities in Cape Verde.

During a meeting to discuss potential partnerships for the management of protected areas, the Cape Verde Minister of Environment, Habitat and Land Use Management, Dr. Antero Veiga, hailed Seychelles’ leadership in designating over 50 percent of its land territory as reserves as “exemplary”, adding that Cape Verde was also interested in further developing its marine reserves. Seychelles’ proposed ‘debt-for-nature’ swap was also discussed as a potential solution to both bringing down rising debt levels and protecting the environment in Cape Verde.

Welcoming Seychelles’ efforts to promote the Blue Economy concept, Minister Veiga expressed hope that the recommendations from the Blue Economy conference held recently in Abu Dhabi could deliver some concrete proposals for the Third International Conference on Small Island Developing States to be held in Samoa later this year.