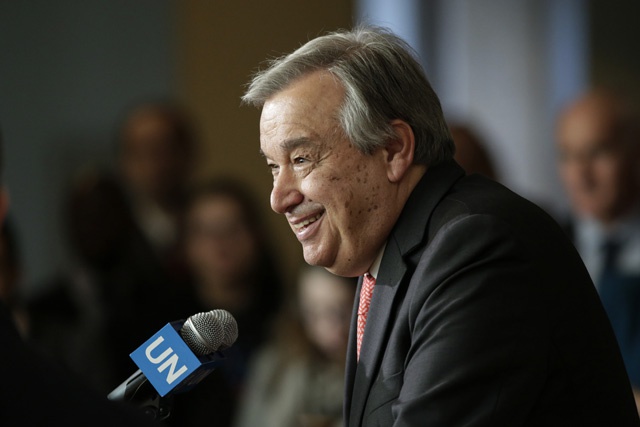 This file photo taken on April 12, 2016 shows Antonio Guterres as he speaks to reporters on the selection of the next UN Secretary-General at the UN headquarters in New York. (KENA BETANCUR/AFP)

(AFP) - The Security Council on Thursday unanimously backed Antonio Guterres, the former prime minister of Portugal who was the UN's refugee chief for a decade, to be the next secretary-general.

The 15 council members adopted a resolution formally presenting Guterres as their choice to be the world's new diplomat-in-chief and requesting that the General Assembly endorse him.

Applause rang out during the closed-door meeting as the council recommended Guterres for a five-year term from January 1, diplomats at the session told AFP.

Speaking in Lisbon after the vote, Guterres expressed gratitude and pledged to work with "humility" to serve "those that are most vulnerable" in the world.

"To describe what I feel at the present moment two words are sufficient: gratitude and humility," he said in remarks delivered in English, French, Portuguese and Spanish.

The General Assembly's 193 member-states are set to vote next Thursday on endorsing Guterres as the successor to Ban Ki-moon, the former South Korean foreign minister who steps down after two five-year terms on December 31.

Guterres will become the ninth secretary-general of the United Nations, but the first who has served as a former head of government.

The unanimous backing followed an informal vote on Wednesday during which 13 of the 15 members supported his candidacy and none of the five veto-holding permanent members -- Britain, China, France, Russia and the United States --blocked him.

Speaking in Rome, Ban hailed Guterres as a "superb choice," saying that "his wide knowledge of world affairs and lively intellect will serve him well in leading the UN in a critical period."

The outcome however confounded some UN diplomats who did not expect such an outspoken candidate with strong political experience to win support from the five permanent council members.

Russian Ambassador Vitaly Churkin, this month's council president, told reporters after the vote that Guterres was a "great choice."

As UN high commissioner for refugees, a post he held until December, Guterres traveled the world and saw "some of the most gruesome conflicts we have to deal with," he said.

Churkin cited his experience as prime minister and described him as "a person who talks to everybody, speaks his mind, a very outgoing, open person."

Guterres will inherit "some of the most complicated challenges to peace, security, human rights and development that the world has known," said US Ambassador Samantha Power

The war in Syria, now its sixth year, has raged on as the council has been bogged down in deep divisions between Russia, which backs President Bashar al-Assad, and Western powers supporting opposition rebels.

With a record 65 million people displaced globally, the United Nations has been struggling to provide humanitarian aid and ensure that the rights of refugees are protected.

Peacekeeping operations, at the heart of the United Nations's mandate, have been clouded by a string of allegations of sexual abuse by the blue helmets sent to protect civilians in Africa.

Ukrainian Ambassador Volodymyr Yelchenko said Guterres must "return leadership to the United Nations" to address so many urgent crises.

"The role of the UN has never been as important as it is today and for that Mr Guterres is the right leader," said Ambassador Francois Delattre of France, which strongly backed Guterres throughout his campaign.

Guterres, a socialist who served as Portuguese prime minister from 1995 to 2002, won the number-one spot in all of the informal votes held by the Security Council.

There were 13 candidates in the race, two of whom dropped out, including seven women who stepped into the fray amid calls from civil society and some countries for a woman to take the top post for the first time, after eight men.

Guterres has promised to ensure gender parity at the United Nations -- a tall order given that women currently hold only 25 percent of its senior leadership positions.

Expectations are that a woman will be appointed to be the UN's number two, its deputy secretary-general.

With the arrival of a new secretary-general, the world body is headed for a shakeup of its top positions, which have traditionally been held by nationals from the powerful countries on the Security Council.

Churkin on Thursday addressed speculation that Russia had traded its support for Guterres in exchange for a Russian-backed appointee to a plum post, possibly as head of the UN's political affairs department.

"There were no under-the-table deals," he said. "There were questions asked. No direct promises given."

Morocco fans celebrate the impossible and ask for more