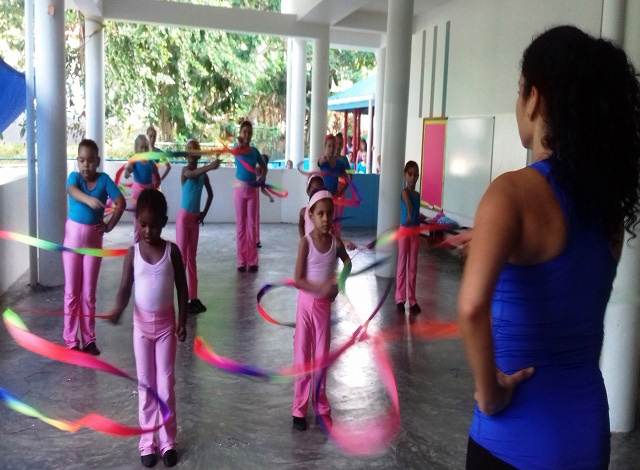 (Seychelles News Agency) - A Seychellois who left her island home 21 years ago to pursue her dream of becoming a professional dancer has returned and is ready to share her passion with some of the youngest islanders.

Maria Doway returned from the United Kingdom earlier this year and has started her own dance academy on the Seychelles’ second-most inhabited island, Praslin, which is now her home.

“I have always wanted to give something back to the country and the academy was exactly it,” Doway told SNA.

It was not difficult for her to recruit a group of excited little girls wearing ballet dresses and shoes from as young as four years. They have joined the newly opened Maria’s Performing Art Academy, which started its first class a few weeks ago.

Doway, 39, holds a diploma in Performing Arts which she obtained from the Merseyside Dance and Drama Centre in Liverpool in 1998, after receiving a Seychelles’ government scholarship.

She already has experience running a dance academy while living in the UK.

“It started out as Maria’s Dream Dancers, a dance school in UK which I started in 2001,” said Doway, adding that it was an exciting time as her students excelled in many competitions and examinations.

The new Maria’s Performing Art Academy is also affiliated with the Dolphin Dance Studio, a staging college based in Liverpool.

“We are following the same syllabus as the college which means that our students can one day become professional dancers or internationally recognized dance instructors.”

This also means that students from Seychelles can participate in summer dance schools in the United Kingdom and guest teachers can also come to deliver workshops in the Seychelles, a 115-island archipelago in the western Indian Ocean.

Doway also teaches musical theatre, something she said she enjoyed the most during her dance student days.

“This allows the student not only to develop their dancing skills but also vocally and acting which builds up their self-esteem and confidence,” she told SNA.

The academy is not only targeting young kids but also older dance enthusiasts who can join an in-house training programme. As Doway puts it: “No one is ever too old to learn something new.”

While there is a school of dance on Mahe, the archipelago’s main island, a dance academy is a first for Praslin Island, with a population of around 6,000.

Doway is hoping to attract as many students from the island itself and from neighbouring La Digue, the third-most inhabited island.

With a desire to inspire more children to showcase their dance talents, she also intends to expand her academy on Mahe in the future, as she believes demand exists for similar programmes on the main island.

From Seychelles to the British Army to the Bank of England: Interview with security expert Ron Bonnelame