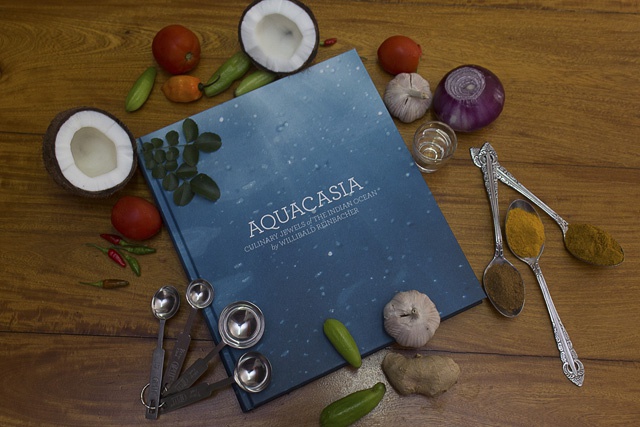 Aquacasia which took two years to produce, was launched in August and will be on sale in the Vanilla Islands. (Salifa Magnan, Seychelles News Agency)

Entitled "Aquacasia," the book is the work of Willibald Reinbacher, executive chef of ‘Shanti Maurice a Nira Resort,’ a luxury hotel in Mauritius, in partnership with the Seychelles Ministry of Tourism and Culture and the Seychelles Tourism Academy (STA).

According to the director of human resources of Shanti Maurice, Deepak Balgobin, “Aquacasia is not only a cookbook but also a brand new food concept.”

It includes dishes made from fish, seafood, meat and poultry and features spices, popular snacks and sweets, all supported by images of the islands.

Balgobin said the title ‘Aquacasia’ is fitting for the book as aqua means water and casia, means spices.

“Spices were passed on the waterway between islands throughout the trade routes of the Indian Ocean,” said Balgobin.

He added that it was not easy to decide on only 62 recipes as there was so much to discover every time he travelled.

Balgobin, who did most of the research through his extensive travels across the Indian Ocean islands, told SNA the dishes are common to all the countries that feature in the book.

“Most are classic dishes that capture the heart and soul of an islander’s love of food, but there are also a few new and inventive interpretations within the book,” he told SNA.

Balgobin said the response has been positive. “I had several food bloggers cooking recipes out of the book and sharing their experiences with others, which is truly a joy to see,” he told SNA.

"Aquacasia," which took two years to produce, was launched in August and will be on sale in the Vanilla Islands -- made up of Seychelles, Madagascar, Reunion, Mauritius and the Comoros in the Indian Ocean . In the meantime, it can be purchased online on Amazon for $33.