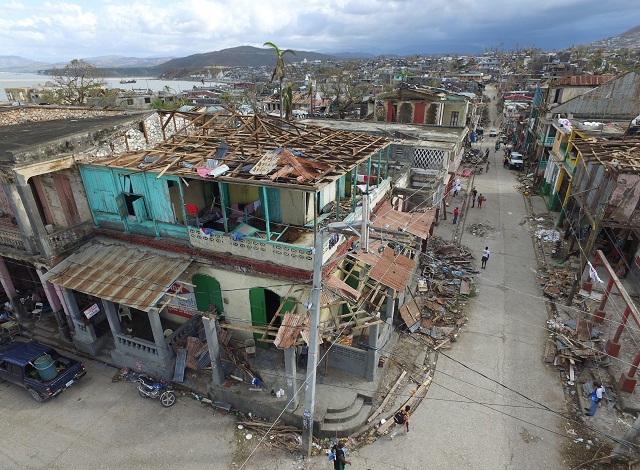 Buildings destroyed and damaged by Hurricane Matthew are seen in Jeremie, in western Haiti, on October 7, 2016. The full scale of the devastation in hurricane-hit rural Haiti became clear as the death toll surged over 400, three days after Hurricane Matthew leveled huge swaths of the country's south. (Nicolas GARCIA / AFP)

(AFP) - The full scale of the devastation in hurricane-hit rural Haiti became clear Friday as the death toll surged past 400, three days after Hurricane Matthew leveled huge swaths of the country's south.

As Matthew threatened the US coast, President Barack Obama urged Americans to mobilize in support of Haiti, where a million people were in need of assistance after the latest disaster to strike the western hemisphere's poorest nation.

While the capital and biggest city, Port-au-Prince, was largely spared, the south suffered devastation.

Aerial footage from the hardest-hit towns showed a ruined landscape of metal shanties with roofs blown away and downed trees everywhere. Brown mud from overflowing rivers covered the ground.

Herve Fourcand, a senator for the Sud department, which felt the full force of Matthew's impact, said several localities were still cut off by flooding and mudslides.

A scene of desolation greeted visitors to Jeremie, a town of 30,000 people left inaccessible until Friday.

No power. No phone lines. People cut off without news of the capital for days since the storm struck Tuesday -- and who had yet to hear that a presidential election due to take place this weekend has been postponed.

Virtually all the town's corrugated-iron homes have been destroyed, with only a few concrete buildings left standing.

"It was as if someone had a remote control and just kept turning the wind up higher and higher," said Carmine Luc, a 22-year-old woman.

"When the roof of my house blew off, I clung to a wall with my left hand, and with my right, I held on with all my strength to my three-year-old child -- who was screaming," she said.

A ship carrying nine containers of food and medical supplies was headed for Dame Marie, further west in Grand'Anse department.

"It's probably the hardest hit department and the conditions don't allow for a helicopter to land there," Interior Minister Francois Anick Joseph told AFP.

"So we're doing our best to help those affected."

Convoys were headed to other affected areas by land, sea and air, he said, including two helicopters provided by the US military to transport 50 tonnes of water, food and medicine elsewhere in Grand'Anse.

Further south, Haiti's third-largest town of Les Cayes was battered, its Sous-Roches district turned from a quiet beachfront neighborhood to a chaos of mud and shattered trees.

The river level has begun to drop, but its waters are still mixed with the storm surge that inundated the beach during the Category Four hurricane's hours-long assault on Tuesday.

"I thought I was going to die. I looked death in the face," said 36-year-old Yolette Cazenor, standing in front of a house smashed in two by a fallen coconut palm tree.

Over 10 hours, hurricane-force wind blasts and heavy rain leveled all the crops in the community's fields, promising lean months ahead even by Haiti's impoverished standards.

Up to 80 percent of crops have been lost in some areas, according to the United Nations Office for the Coordination of Humanitarian Affairs.

Around one million people are in need of urgent assistance, according to CARE France, a humanitarian group.

"They have nothing left except the clothes on their back," it said.

As the toll climbed, pledges of aid flooded in, with the United States announcing it was sending a Navy ship, the USS Mesa Verde, whose 300 Marines will add to the 250 personnel and nine helicopters already deployed to Haiti.

The Mesa Verde is transporting Marine teams that specialize in medical-emergency assistance and reconstruction, as well as three transport helicopters.

France announced it was sending 60 troops, with 32 tonnes of humanitarian supplies and water purification equipment.

Obama also urged Americans to donate for Haiti via the Red Cross or other charities.

"We know that hundreds of people have lost their lives and that there's been severe property damage and they’re going to need help rebuilding," he said.

"Even the smallest contribution can really make a big difference."

The country has had its fair share of natural disasters: Haiti sits on a hurricane path. And in January 2010 was hit by a devastating earthquake that demolished much of the capital and left more than 250,000 dead.

Since then, the nation has been struggling to overcome a cholera outbreak.

Some of its needs have been met by international aid.

But the large-scale international aid programs in place since the quake have also been criticized for failing to build local capacity while spending millions on their own short-term programs.

So Joseph, the interior minister, insisted that "it's out of the question for NGOs to take charge of humanitarian aid."

"We are very firm on this point: this country is led by a government. Across the country, it's civil protection services that are coordinating everything," he added.

"We are not going to turn this country into a messy chaos. It's not going to happen. We already experienced that in 2010, we learned from our mistakes, we will act responsibly."

Many ordinary Haitians are skeptical of help from abroad -- in a country whose economic decrepitude is seen as connected to its disastrous post-colonial legacy of foreign intervention and home-grown corruption.

"I've never believed in foreign aid," said Gedeon Dorfeuille, a resident of Les Cayes. "Please, don't come back promising us billions again if nothing is to come of it."

General » Be a reporter: Write and send your article » Subscribe for news alert
Tags: US, Caribbean, weather, Hurricane, Haiti