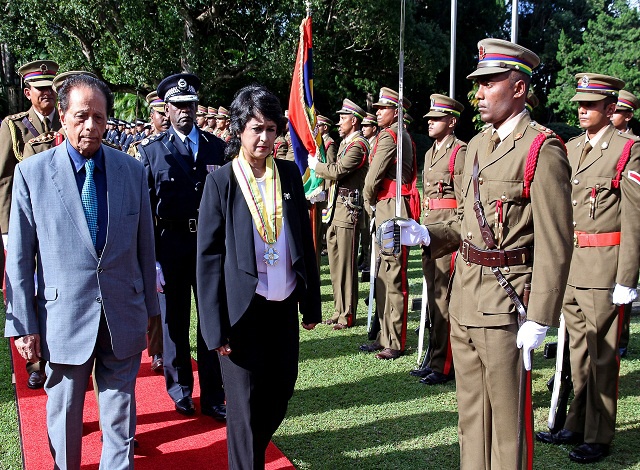 New President of Mauritius Ameenah Gurib-Fakim (C) reviews a guard of honour, flanked by Mauritius' Prime Minister Anerood Jugnaut (L), during her swearing in ceremony at the State House, the president's official residence, in Reduit, south of Port Louis, on June 5, 2015. Sir Anerood Jugnauth, 86, has indicated he will likely step down as prime minister before his term expires in 2019, creating a quandary for residents of the Indian Ocean island, best known as a dream beach holiday destination. (AFP PHOTO / NICOLAS LARCHE)

(AFP) - Mauritius, a model of political stability in Africa, may be headed for turbulence as its leader looks set to resign before the end of his mandate and pass the baton to his son.

Sir Anerood Jugnauth, 86, has indicated he will likely step down as prime minister before his term expires in 2019, creating a quandary for residents of the Indian Ocean island, best known as a dream beach holiday destination.

Jugnauth's son and finance minister Pravind, 54, is leader of the ruling Militant Socialist Movement (MSM) and according to the constitution, would be the person to step into the prime minister's shoes if he resigns.

But this likelihood has sparked fierce debate, with the opposition and residents calling for early elections.

"The prime minister's post is not inherited," reads a Labour Party poster, one of many plastered around the capital Port Louis.

Posters belonging to the Mauritian Militant Movement (MMM) declare the country "upside down".

Mauritius, an island of 1.3 million inhabitants, regularly tops the Mo Ibrahim Index of African Governance, and has held a series of peaceful elections and smooth handovers of power since independence from Britain in 1968.

It was in September that Jugnauth, who has done several stints as premier since 1982 and one in the ceremonial role of president, indicated he may retire.

"I won't be here forever," he told journalists when asked about rumours he was planning to step down. Asked when his departure could take place he replied: "You will find out very soon."

However he was clear about how events would unfold.

"The transition will take place as in all democratic countries. You must be the leader of a party which holds the majority in the National Assembly, as is the case in the Westminster tradition in England."

The two other leaders in the current ruling coalition, Xavier-Luc Duval of the Mauritian Social Democratic Party and Ivan Collendavelloo of Muvman Liberater (Freedom Movement) are planning to support the nomination of Pravind Jugnauth, who like his father is a lawyer.

According to the constitution, President Amenah Gurib Fakim is only obliged to call fresh elections if parliament fails to agree on a candidate for prime minister.

However opposition leader and former prime minister Paul Berenger of the MMM argues that early elections should be called either way.

"Mauritius is not a monarchy, not a dynasty. It is not good to give the impression that the prime minister must be succeeded by his son. That is why we are calling for general elections to allow the population to decide freely," he said.

That sentiment is shared by numerous residents phoning in to local radio shows, declaring they voted for Jugnauth senior in 2014, not his son.