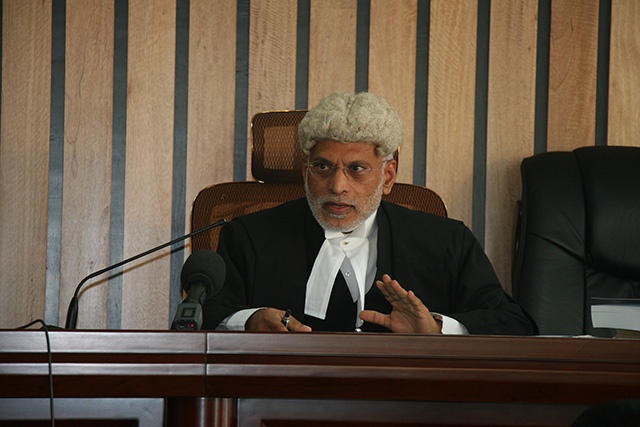 (Seychelles News Agency) - The Seychelles judiciary on Monday announced the suspension of Supreme Court Judge Durai Karunakaran, saying that his “professional conduct” is being referred to a tribunal of inquiry.

“Judge Karunakaran has been suspended by President [James] Michel, effective immediately, from performing the functions of a judge,” reads the statement by the Executive Legal Assistant to the Chief Justice, Joelle Barnes.

“His suspension, according to the Chief Justice Mathilda Twomey, is as a result of a decision made by the Constitutional Appointments Authority to refer Judge Karunakaran to a tribunal of inquiry to investigate into his professional conduct,” the statement adds.

In a statement released Monday afternoon, State House said President Michel, under article 134 (4) of the Constitution was suspending judge Karunarakan from performing his functions until the conclusion of the inquiry.

No further details were given about Karunakaran’s "professional conduct.” The statement added that the judiciary will not be answering any further questions on the matter, which is under investigation.

Repeated calls to Karunakaran by SNA to see if he wanted to comment were not answered.

According to article 134 of the Seychelles’ constitution, a justice of appeal or judge may be removed from office only for inability to perform the functions of the office, whether arising from infirmity of body or mind or from any other cause, or for misbehaviour.

It adds that where the Constitutional Appointments Authority (CAA) considers that the question of removing a justice of appeal or judge from office ought to be investigated, the authority shall appoint a tribunal, which shall inquire into the matter, report on the facts to the authority and recommend to the president whether or not the justice of appeal or judge ought to be removed from office.

Article 134 also states the suspension may, on the advice of the Constitutional Appointments Authority, be revoked at any time by the president.

The Constitutional Appointments Authority is the body that recommends the appointment of constitutionals posts including that of judges to the president.

The judiciary has said that as a result of the Judge Karunakaran’s suspension, the Court is making immediate arrangements to ensure minimal delays in case proceedings and to reduce the impact it has on any and all cases currently before the Court.

Indian-born Judge Durai Karunakaran – also a naturalized Seychellois -- was appointed as Counsel and started practicing law as Barrister and Attorney-at-law in Seychelles in 1983.

He joined the Seychelles Judiciary as Magistrate in 1989 and was later promoted to the post of Chief Magistrate.

In 1999, he was elevated to the bench and was appointed as Judge of the Supreme Court of Seychelles.

Karunakaran also served as the Acting Chief Justice between 2014 and 2015.