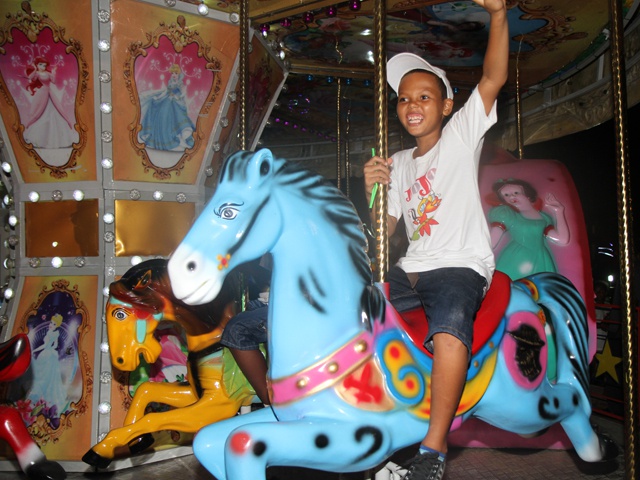 (Seychelles News Agency) - It’s been barely a few hours since it opened its doors and the brand new family fun park aptly named “Paradis des Enfants” (Children’s paradise) located at ‘La Promenade’ in the Seychelles capital of Victoria got rave reviews from the young critics who were at its official opening ceremony earlier this evening.

It was organized gleeful chaos at the playground, as the boys and girls of different ages gushed at each new discovery.

While most people would have thought the youngsters would all make a beeline for the ice rink – a first in Seychelles, the reality proved to be quite different as most children interviewed by the SNA were tripping over each other to get a chance at the slides and carousel.

The brightly coloured carousels proved to be real hits with the under twelve age group and the swings and caterpillar slide brought back fond memories of their previous playground.

“I like this fun park, it is more modern and has different entertainment for us, but I preferred the old one because it was more spacious, the toys were well spread out. This is somewhat tight, but still it is great fun. I am going to have hours of fun here,” exclaimed twelve year-old Ella Petrine who claimed that her favourites are the new skating rink and the carousels. She added that at the old playground the monkey bars had been her favourite and wished some would be added to the fun park.

For his part Gael Banane was looking forward to some serious sliding and reaching some heights on the swings.

Enjoying a game of chess at tables designed especially for this, 11 year-old Ryan Cupidon was very enthusiastic about the carousels and stated that the new fun park is much better organized and more beautiful than the old playground, although he would have preferred to have the attractions of the “Paradis des Enfants” in the location of “Zarden Zanfan” the old children’s playground closed down for some time now, only a few metres away.

Echoing these sentiments Larry Antat was full of praise for the slides and declared himself as being enchanted by the cartoon characters roaming around the park. ‘I wouldn’t mind having my photo taken with Mickey Mouse,” he said.

Seychelles National Children’s Council Director Ruby Pardiwalla said the NGO welcomes the return of an area dedicated to the children.

“I think it’s lovely to have a playground back again for the children. It is a safe place where they can come with their family so that they can spend quality time together.”

NCC had for a while been in charge of running the previous playground and although “Paradis des Enfants” has its own management company Pardiwalla said NCC has been involved all along and is represented on the board.

“We will always be there to accompany Seychellois children,” she stated.

As a parent Anna Rose Beaudoin had a hard time convincing her little girl that it was time to go home and that they would come back another day.

‘It is lovely, just lovely, but I sincerely hope they do not allow it to fall into the same state of disrepair as they did the previous one. That one too was partly the result of a generous donation, I think Mr. Willy Leib contributed a lot towards it, now Sheikh Khalifa has helped make this one a reality, we should take care of it and this way we can truly show our appreciation for such a gift,” she reflected.

It was Seychelles President James Michel who opened the “Paradis des Enfants” family fun park in the company of his daughter Laeticia Michel and a primary 6 pupil of Cascade school Shiniqua Eastwood, who won the national competition to name the fun park.

“On behalf of the people, and in particular the children of Seychelles, I would like to thank the President of the UAE and Ruler of Abu Dhabi, Sheikh Khalifa bin Zayed Al Nahyan, and the people of the UAE for the donation of this beautiful family fun park. It will be an important centre for family life and the development of good, healthy recreational habits, which will benefit our society and be a source of much enjoyment for all Seychellois children,” said Michel in a statement.

The park cost $ 3.7 million to build, it was financed by a $ 2.4 million donation from the Government of Abu Dhabi of the UAE, and the remaining amount by the Government of Seychelles, partly through collection of the Corporate Social Responsibility Tax.

The project started towards August 2013.

Families have free access to the Fun Park while some areas such as the ice rink and electronic games centre can be accessed by paying a fee.

Israel and UAE to normalise ties in 'historic' US-brokered deal