US halts deportations of Haitians after hurricane 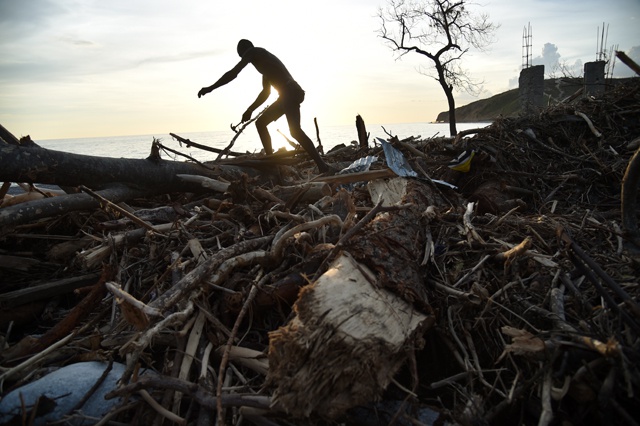 A man collects debris from a destroyed house in the small village of Labey, in the commune of Chadonyer, in Les Cayes, in the south west of Hiti, October 11, 2016. (HECTOR RETAMAL/AFP)

The United States stopped deporting Haitians to their country as a humanitarian measure following the 2010 earthquake that killed 220,000 in the Caribbean nation.

But after thousands began to arrive at the US-Mexico border in recent months, Johnson announced last month that Haitians would again be treated like other migrants who entered the United States illegally.

Speaking in Mexico City after immigration and security talks with ministers, Johnson said he was suspending the decision to deport Haitians due to Hurricane Matthew, which killed hundreds last week.

"We will have to deal with that situation, address it, be sympathetic to the plight of the people of Haiti as a result of the hurricane," Johnson said.

"But after that situation... we intend to resume the policy change," he said after meeting with Mexico's foreign and interior ministers.

Throngs of Haitians have massed at the border city of Tijuana, across from San Diego, California, overwhelming the immigration authorities and shelters as they seek to enter the United States.

Many have arrived from Brazil, where they had moved and worked in projects for the 2014 World Cup and this year's Olympic Games. But they decided to move to the United States after the South American nation's economy tanked.

The perilous trip across eight nations takes Haitians around three months at an average cost of $3,000 each.

Mexican Interior Minister Miguel Angel Osorio Chong said his government was implementing policies to give "the necessary humane conditions" to the Haitians stuck in Mexico.

Mexican officials asked Johnson to ensure that the US authorities speed up processing Haitian migrants, he said, adding that he also expects the influx of Haitians to rise due to the hurricane.

General » Be a reporter: Write and send your article » Subscribe for news alert
Tags: Haiti, US, deportations, Hurricane Matthew