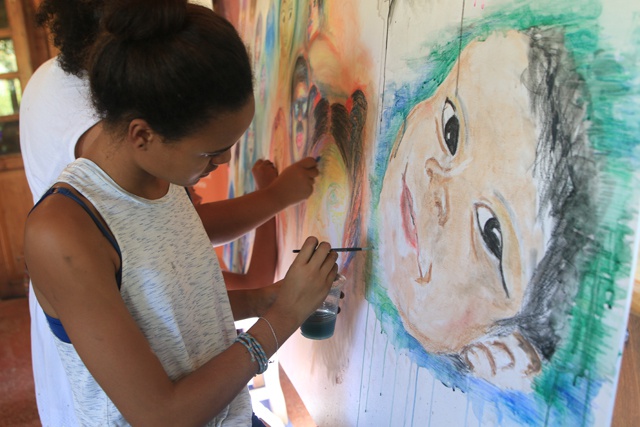 Participants had to draw expressions of people they considered to be typical Seychellois. (Joe Laurence, Seychelles News Agency)

(Seychelles News Agency) - How can you recreate a typical Seychellois face on canvas? Artists at a globally celebrated "Big Draw" event used random pencil strokes and light or heavy shading with a touch of pastel colouring.

Organised for the first time in Seychelles, an 115-island archipelago in the western Indian Ocean, the local event was part of the Big Draw Festival, the world’s biggest celebration of drawing.

Twenty-three students from state and private schools in central Mahe, the main island, and the Seychelles National Institute of Art and Design participated in the one-day mural painting activity under the theme ‘Seychellois Faces’.

Participants had to draw expressions of people they considered to be typical Seychellois.

Shaun Andriamaro, 15, from Ecole Française (French school), said he was fascinated by a picture of a man with dreadlocks he saw in a Creole magazine and this inspired his drawing.

“I chose this picture to draw because the guy is smiling and he looks like a traditional Creole Seychellois so he represents the theme we are working on today.”

Another student from Ecole Française, Jean-Philipe Vannier, says that his interest in drawing started about three years ago and now it has become a habit. Vannier drew the same picture as his friend Andriamaro.

“I feel like the picture represents the Seychellois culture since the guy is on his bicycle, smiling with a packet of fish in his hands,” Vannier said.

Elza Lespoir, 18, from the School of Visual Arts, wanted to challenge herself and drew the expression of an old lady in a hat that she also found in a local magazine.

“As soon as I looked at the picture, I thought it was a pure Seychellois expression. Everything about this lady is Creole and represents our culture,” said Lespoir, adding that she wants to become an artist.

Close to the inspiring artists in the Big Draw event were some of the masters to provide guidance.

Alcide Libanotis -- a full-time sculptor who teaches art part time at the Seychelles International School -- participated in the event and said that drawing is the baseline of all types of art.

“Drawing facial expressions is actually what I find most challenging to do because it is a marvellous thing to capture an expression on paper,” Libanotis said.

He added that: “For sculpting, sometimes you have to sketch out the idea in your head, but now I got the opportunity to actually draw something which I enjoy very much.”

The Seychelles Big Draw was organised by the Arterial Network, an association of local artists who meet on Saturdays at the Kaz Zanana art studio in the country’s capital, Victoria.

Georges Camille, chair of Arterial Network says, ”The Big Draw is an event that started in the United Kingdom and is celebrated annually around the world, with the sole purpose of celebrating drawings in its pure form and encourage more people to draw.

“In the past, we have targeted mainly professional artists, but all professional artists started when they were young, so now we included young students, and we have done it in such a way that they can interact with well-established artists,” said Camille.

Camille added that: “In this day and age where technology has taken away a large part of our lives with electronic devices, it would be a good idea if kids actually took the time to draw.”

The chair of the Arterial Network said the paintings of facial expressions will be displayed outside of the Kaz Zanana Gallery and in selected areas in the capital for everyone to enjoy, as part of the ‘Festival Kreol’ (Creole Festival) scheduled for the last week of October.