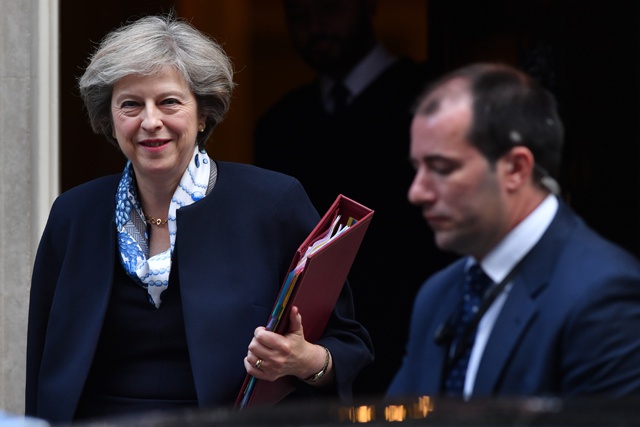 (AFP) - The battle over Brexit reaches the High Court on Thursday in a legal challenge to Prime Minister Theresa May's right to start negotiations for Britain to leave the European Union.

The case was launched in the aftermath of Britain's June 23 referendum which saw 52 percent of Britons vote to leave the EU.

It seeks to challenge May's assertion that she as prime minister has the right to trigger Article 50 of the EU's Lisbon Treaty, which would spark two years of negotiations on Britain's departure from the bloc.

The government says it has "royal prerogative" -- a type of executive privilege -- to negotiate Brexit without needing a legally-binding parliamentary vote.

But those behind the legal challenge -- including an investment fund manager, a hairdresser and an expatriate living in France -- argue such a process cannot begin without a vote in parliament.

Gina Miller, co-founder of investment fund SCM Private, wants parliament to legislate on the terms of Brexit before May can trigger Article 50.

"This is not about whether we should stay or leave -- this is actually about how we leave," Miller told AFP on Wednesday.

The fund manager is being represented on a pro bono basis by Mishcon de Reya, a prestigious law firm whose offices were picketed by pro-Brexit campaigners in July for taking on the case shortly after the referendum.

Miller, who campaigned for the UK to remain an EU member, said other business leaders had not joined her legal challenge because "people are really frightened to put their heads above the parapet".

"I myself have received death threats... Apparently my head belongs on Traitors' Gate," she said, referring to the arch through which prisoners were brought to the Tower of London in the 16th century.

"Our business has been boycotted. It's been quite vile. But I won't be bullied because to my mind this is best for everyone, to have legal certainty".

Although May has accused the claimants of trying to "subvert" the results of the referendum, the prime minister on Wednesday signalled she would let parliament scrutinise her Brexit plan before starting the formal EU exit process.

But she stopped short of agreeing a vote for MPs on her plan before the government triggers Article 50.

Asked in the House of Commons if there would be a vote, May only replied: "The idea that parliament somehow wasn't going to be able to discuss, debate, question issues around (Brexit) was frankly completely wrong."

She made it clear that any scrutiny would not change the outcome of the referendum, telling MPs: "The UK will be leaving the European Union. We're not asking ourselves what bits of membership we want to retain."

May has promised to start Brexit procedures by the end of March 2017, a timetable which could be delayed for months if Miller and her fellow claimants win their case.

Miller said her battle was not mainly about her business but about the principle of parliament's rights.

"If we bypass or we set a precedent... that a prime minister can decide what rights we have and what rights we don't, then basically we go back to being a dictatorship and we roll back democracy 400 years."