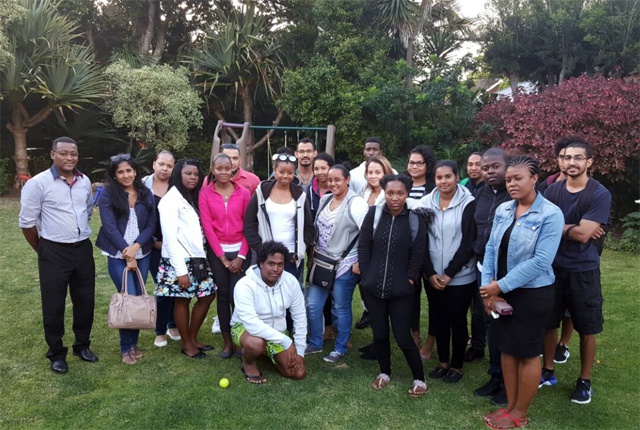 The Chief Executive Officer of the Agency for National Human Resource Development (ANHRD) Terence Francoise (first left) pictured with some of the Seychellois students studying in South Africa during his visit to the African nation early this week. (Terrence Francoise, ANHRD)

The Chief Executive Officer of the Agency for National Human Resource Development (ANHRD) Terence Francoise told SNA that the return of a dozen students is temporary.

“They have decided to return to Seychelles until calm is restored in South Africa and their universities reopen,” Francoise told SNA, adding that the majority of the almost 50 Seychellois students in South Africa have opted to remain there.

Francoise travelled to the African nation early this week. His visit was prompted by concerns raised by the students as well as their parents, following weeks of violent protest between police and university students over the government’s plan to increase university fees by as much as eight percent next year.

He told SNA that the Seychellois students are not directly involved in the violence and are therefore safe. He explained however that although they are not facing direct physical threats, the closure of some universities have disrupted their academic calendar.

“Some have expressed fears that the universities will not resume anytime soon, especially those who are completing their studies in December, whereas others are just sad and feeling down over the whole situation,” Francoise said.

The University of Kwazulu Natal, Westline Aviation, Rhodes University, SAE Institute and Prestige Academy each have one Seychellois student enrolled in their courses.

Francoise said that among these universities, two of them -- Nelson Mandela Metropolitan University and the University of Cape Town -- have been directly affected by the protests and forced to shut down.

“Students at the University of Cape Town have been able to follow some modules online and are submitting their assignments online. However, no classes are taking place at the Nelson Mandela Metropolitan University,” Francoise told SNA.

Francoise, who also spoke to students from other universities where the violence has not spread, said that they are doing well.

With regard to those who are expected to complete their studies in December, and whose courses and exams might be delayed due to the current situation, the relevant Seychelles’ government agencies are liaising with the South African authorities for the renewal of their visa.

“We are unable to say when the universities will reopen their doors. In the event that this is delayed, then courses and exams will be pushed, meaning those who were supposed to return in December will have to remain in South Africa for a little bit longer,” he explained.

In recent weeks, protests over the cost of university education have swept across most of South Africa’s 26 universities, with violent clashes between students and police at some campuses.

According to an article published by Reuters: “The protests came after President Jacob Zuma's government said it would continue subsidizing university costs for the poorest students but could not afford free education for all.”

“South Africa data shows that university fees have soared by 80 percent since 2008, leading to the initial batch of protests last year that forced Zuma to scrap proposed increases for 2016,” the article said.