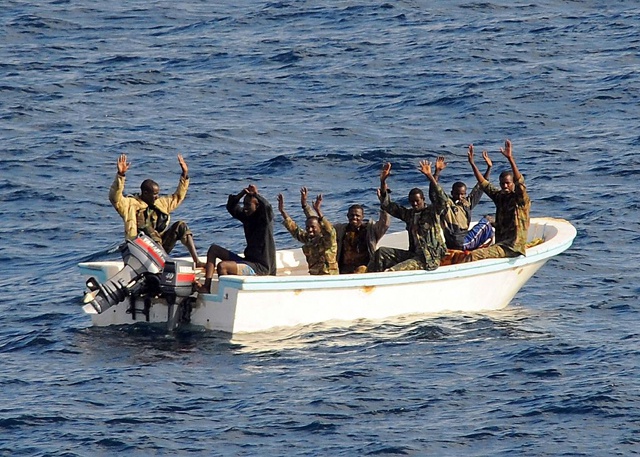 File Photo: Suspected pirates keep their hands in the air as directed by a patrol from the guided-missile cruiser USS Vella Gulf, in the Gulf of Aden (AFP Photo/Jason R. Zalasky)

(AFP) - Stemming the astronomical losses caused by crime in the oceans surrounding Africa is the focus of a major continental summit on Saturday in the Togolese capital, Lome.

"Over recent decades, the accumulated revenue losses resulting directly from illegal activities in the African maritime sector add up to hundreds of billions of US dollars, without counting the loss of human lives," the African Union (AU) said in an online statement about its Protect Our Oceans meeting.

Up to 30 African heads of state and government are expected to attend the gathering, whose full title is the AU Extraordinary Summit on Maritime Security and Safety and Development in Africa.

The long-term aim, according to the AU, is to "make maritime space the key driver of Africa's economic and social development".

While illegal fishing, smuggling, pollution and economic development are up for discussion, there is one particular issue set to take centre stage.

"Between 2005 and the present, we have suffered more than 205 attacks. Pirates give priority to raids on oil tankers but they also target merchant shipping," he explained.

Oil-rich Nigeria is at the heart of the problem, with many piracy attacks taking place off its coast or in the waters of neighbouring states.

Perpetrators are often offshoots of armed insurgents from the Niger delta, home to the continent's largest oil reserves.

That the billions generated from these reserves has done little to improve the lives of most Nigerians has been a key driver of violence in the delta and offshore.

Piracy has proliferated partly because of a chronic lack of cooperation and information-sharing between African countries, although steps to remedy this disconnect have already been taken at maritime security meetings in Cameroon in 2013 and in the Seychelles last year.

Building on those two gatherings, the hope is that leaders in Lome will adopt a binding, continent-wide charter on maritime security that as well as piracy encompasses the other issues on the summit's agenda.

"Most African countries that have a coastline are victims of one of these problems, which is why it's so important for African leaders to sit down and try to find solutions," said Dussey.

One project on the table to reduce these losses is a catch certification scheme for the import and export of fishery products.