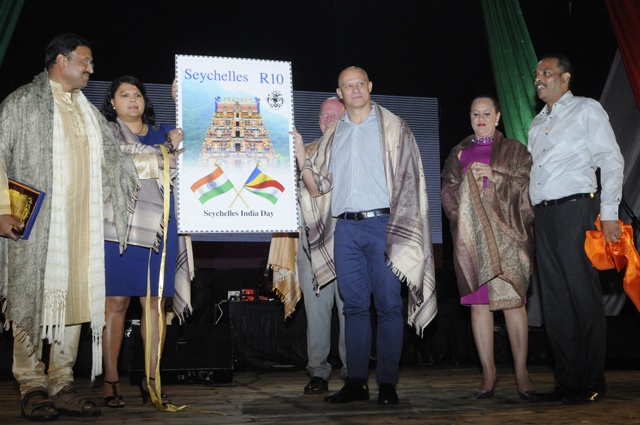 The Seychelles Postal Services collaborated with the Indian Association of Seychelles to release the stamp, which depicts the only Hindu Temple located in the island nation’s capital, Victoria. (Patrick Joubert, Seychelles News Agency)

(Seychelles News Agency) - A new commemorative stamp was launched on Friday aimed at showcasing Seychelles-India relations, as well as creating a symbol of the annual celebration of the Seychelles’ Indian heritage.

The stamp was unveiled at the official launching of the 2016 edition of the Seychelles-India Day, an event that has been celebrated since 2013.

The Seychelles Postal Services collaborated with the Indian Association of Seychelles to release the stamp, which depicts the only Hindu Temple located in the island nation’s capital, Victoria.

The Chairperson of the Indian Association, Ramakrishnan Ramu Pillay, told SNA that they wanted to create something that would leave a historical imprint of the annual event, adding that the temple was chosen because of its cultural and touristic value.

"We chose the Indian temple because it's never been used in such way before and many tourists visit the temple on a daily basis, hence are familiar with this iconic establishment in the country,” said Pillay.

“When they send a post card to their friends and families abroad, they will be promoting Seychelles India-Day through this new stamp," he added.

The Director of Operations of Seychelles Postal Services, Barbara Esther, told SNA that the last time they issued a commemorative stamp was over two years ago.

She said that Indian Ocean Association opted for the stamp in its quest for something that would also showcase the good relation between Seychelles and India.

“They designed the stamp themselves choosing what to put on it and the postal services facilitated the process, making the final product what it is today," said Esther.

Many of the Indian Ocean archipelago’s 93,000 mixed population can trace their roots back to one or more ancestors with Indian heritage. The stamp was but one initiative announced as part of efforts to add value to the place India holds as part of the country’s cultural diversity.

At Friday’s launching ceremony, the Seychelles Tourism and Culture Minister Alain St.Ange also announced that plans are underway to build a bust of Mahatma Gandhi in Victoria.

According to hubpages.com, statues of Mahatma Ghandi -- often referred to as the apostle of non-violence -- have been erected in more than 70 countries across the globe.

Minister St Ange said: “We believe as a country that the influences set by Mr. Ghandi is something that needs to be treasured."

The launching of the Seychelles-India Day was attended by both Seychellois and Indian nationals, who were treated to music and dance performances by guest artists from India.

It was announced on Friday that the celebration of the Seychellois-Indian culture is now a national cultural event in the country alongside Festival Kreol  and Carnaval International de Victoria.

The Indian High Commissioner to Seychelles, Sanjay Panda, congratulated the Indian Association of Seychelles for giving the event the cultural importance it holds today.

"So far it has been a fairytale journey, after that a national event, now it's going to grow further in stature," said Panda, who seized the opportunity to announce his departure after being the Indian High Commissioner for the last two years.

Panda also presented a cheque worth around $30,000 (around 400,000 Seychelles rupees) from the Indian government to the Indian Association in recognition of the effort made to spearhead the Seychelles India day over the past 3 years.

This year’s edition of the annual event will proceed with a free musical gala night on Saturday evening, while cooking enthusiasts were treated to a culinary session with the help of an Indian chef earlier on Saturday.