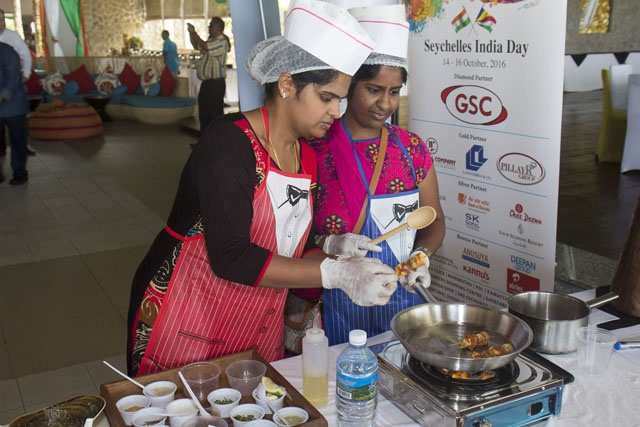 Ten pairs of mostly Indian, but also a few Seychellois nationals, most of them women, were to prepare three Indian dishes during the Seychelles-India Day event.(Salifa Magnan, Seychelles News Agency) Photo License: CC-BY

(Seychelles News Agency) - Not everyone’s talent lies in the kitchen, especially when it comes to getting the right aroma and flavor of a typical Indian dish.

For a group of cooking enthusiasts in Seychelles, step-by-step guidance by an Indian chef helped improve  the tricky kitchen skill of how to combine the right mix of ingredients and spices.

Chef Karan Mehta from India’s Le Meridien New Delhi Hotel got 10 pairs of mostly Indian, but also a few Seychellois nationals, most of them women, to prepare three Indian dishes at the weekend.

Chef Mehta’s culinary workshop held on Saturday at the AVANI Seychelles Barbarons Resort & Spa on the western side of the Seychelles main island, Mahé, was one of the activities to mark the Seychelles-India Day. The fourth edition of the event was brought to a close on Sunday.

One of the participants, Cynthia Alexander, told SNA that on top of desiring to learn something new, she also wanted to experience working alongside a great and experienced chef.

Chef Mehta showed his cookery students how to put together a three-course Indian menu.

A kebab recipe of skewered spices, marinated cottage cheese chunks, mushrooms and vegetables featured on the menu as an appetizer. Boneless chicken pieces sautéed with spices, onion and chilies and stuffed into a roti was to be served as the main course, while sweet fried, sugar-syrup-dipped bread topped and soaked with fragrant sweet thickened milk was prepared for dessert.

Mehta explained to SNA that “the ingredients that we [were] using in the recipes are very common in terms of procuring.”

With the help of other chefs working at the Avani resort, Mehta observed the presentation of each dishes and tasted all food prepared by the participants. He then decided on which pair had come up with the best dish in each category, and winners also received prizes.

Diana Köener, who teamed up with Vanessa Zialor, were one of two groups that prepared the best dessert.

Speaking to SNA after all their hard work in the kitchen, they said that they were feeling confident and competitive from the start, adding that “It's a good, really nice surprise to have won and it was a lot of fun.”

Mehta has 30 years of experience working as a chef.

He told SNA that he struggled a lot when he first started out in the industry, and had to sacrifice his social and family life to progress in his career.

“Working in the kitchen is not easy, however if you have a passion and you are mad about cooking, there is no better profession than to be cooking food. I feel proud when I wear this coat,” said Mehta who specializes in Indian and European cuisine.

The Indian chef has won several culinary-contests and also holds the ‘Master Chef of the Year – 2007’ title organised by Delhi Tourism.

He has also featured in 16 episodes of “Mallika-E-Kitchen,” a  live culinary show on Colors TV Channel.

Spices are greatly used in Indian cuisine and chef Mehta said that most of the spices are natural remedies for various illnesses.

“Whenever a chef prepares food, it should be done with positive energy. By doing so, respecting your kitchen and ingredients, you will be passing on the best of health to the next generation,” said Mehta, who believes that the best chef is always one's mother or grandmother.

This is not the first time Indian chefs have been brought in to run culinary shows and bring their own specialty and taste of Indian cuisine to the island nation during the Seychelles-India Day event.

Ramakrishnan Ramu Pillay, the Chairperson of the Indian Association in Seychelles that spearheads the annual event, described food “as one of the biggest attractions in the Seychelles-India day.”

Pillay is hopeful that more Seychellois nationals will want to take part in such culinary shows in the future.