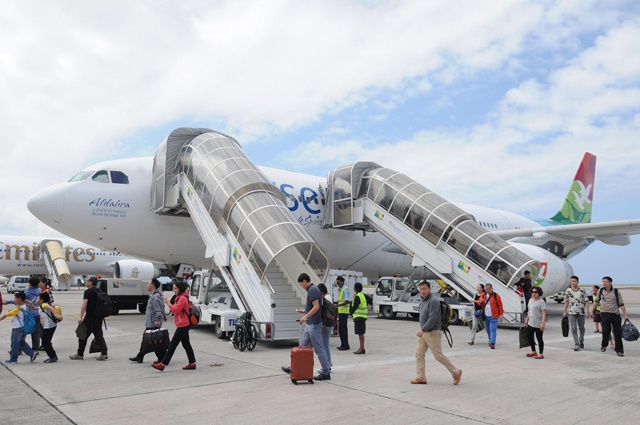 (Seychelles News Agency) - Seychelles should have a new international airport in the next three to four years as the island nation aims to keep pace with growing demand and increased expectations of the travel market, a top government official has said.

The Seychelles Foreign Affairs and Transport Minister Joel Morgan last week signed an agreement with Ali Majed Al Mansoori, the Chairman of the Abu Dhabi Airports Company (ADAC), whose expertise has been sought for the airport upgrade project.

The agreement signed in the United Arab Emirates follows more than three years of discussions between ADAC and the Seychelles' government.

Morgan told SNA that the signing of the agreement now means “the two parties, after ongoing discussions have come to an understanding as to the next steps needed and how to proceed in a methodical manner.”

“Discussions on the approach, start date for development, all other details needed for such an elaborate and truly huge investment in the Seychelles, opening opportunities for local employment -- during the development and after completion -- is still about a year away or more before starting.”

ADAC’s chairman Ali Majed Al Mansoori said the aim of his company is to help to deliver an updated passenger terminal operating to the highest international standards.

“As the Seychelles grows in popularity as a holiday destination for UAE tourists and visitors from around the world, the need to keep up with the demands and expectations of the travel market has never been more important,” he added.

The existing Seychelles International Airport was opened in 1972 by Queen Elizabeth II while Seychelles was still under colonial rule.

It is now becoming too small to handle the increasing amount of traffic to the islands which is mostly generated by tourism, the main pillar of the Seychelles' economy.

Visitor arrival to the Seychelles, a 115-island archipelago in the western Indian Ocean, nearly reached 280,000 in 2015.

The Seychelles Civil Aviation Authority (SCAA) has been carrying out improvements on the existing airport infrastructure, for both international arrivals and departures, as well the domestic terminals.

The new international airport, which is expected to be situated to the north of the existing airport, is aimed at going a step further in ensuring that Seychelles remains competitive in the global travel market.

Morgan said that for now the design of the new airport and its facilities is still at an early stage.

“The new airport will have to be appealing, capture the essence of Seychelles and its culture, be efficient, represent and have in place state of the art technology and most importantly, be environmentally friendly and incorporate renewable energy systems,” said Morgan.

“If all goes according to plan, we can safely say by 2019 or 2020 we will be making ready to welcome our new international terminal.”

Morgan said the construction project will probably cost around $150 million.

In an interview with SNA last year Morgan said that in addition to the new airport building, the existing airport facilities are expected to be used for additional services, such as a terminal for private jets, additional cargo space and other needed facilities as the airport requirements grow.

The partnership with ADAC adds to already existing ties between the Seychelles’ and UAE governments.

Abu Dhabi-based Etihad Airways invested in a 40 percent equity stake in the Seychelles national airline, Air Seychelles in 2012, which was previously wholly owned by the Seychelles' government.

Abu Dhabi has also provided development grants to the Seychelles since the start of the economic reforms to help overcome the archipelago’s economic difficulties, which has gone towards funding of several projects including housing, a renewable energy project among others.