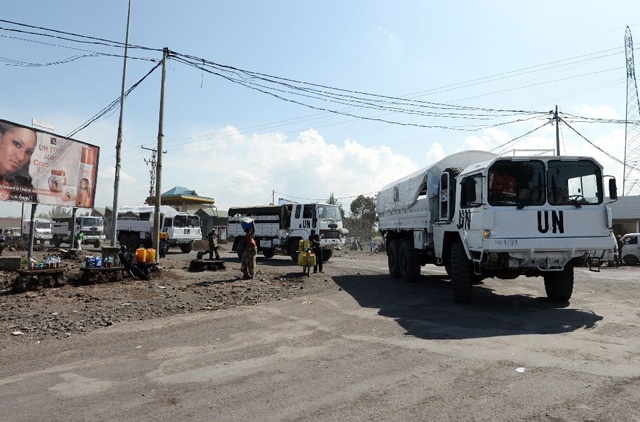 About 300 soldiers and police from the MONUSCO force will be stationed in Kinshasa, where violent protests killed 49 last month (AFP Photo/Junior D. Kannah)

(AFP) - The United Nations is moving hundreds of peacekeepers from eastern Democratic Republic of Congo to Kinshasa to help deal with a possible outbreak of violence over the postponement of a presidential election, UN officials said Tuesday.

About 300 soldiers and police from the MONUSCO force will be stationed in Kinshasa, where violent protests killed 49 last month, the officials said.

"We are planning for all eventualities and have taken measures to strengthen our posture in Kinshasa," UN peacekeeping chief Herve Ladsous said.

However, the reinforcements would probably not be enough if the capital sees widespread violence, he cautioned.

"It's important to keep in mind that Kinshasa is a city of almost 11 million people and MONUSCO has neither the manpower nor the mandate to provide security," he said.

Political tension has been mounting over President Joseph Kabila's apparent bid to cling to power.

An agreement was reached on Monday to push the presidential election, set for this year, back to April 2018.

But opposition parties boycotted the deal, calling for a major protest on Wednesday.

The UN envoy for the Democratic Republic of Congo, Maman Sambo Sidikou, warned last week that the country had entered a period of "extreme risk to its stability," saying "large-scale violence is all but inevitable" if nothing is done to address the crisis.

The UN Security Council is considering a trip to the country next month to try to help find a way forward in the political crisis, diplomats said.

One of Africa's biggest and most resource-rich countries, the DR Congo has been ruled by Kabila since 2001, when his father Laurent was assassinated.

He was elected in 2006 to his first five-year term under a constitution that sets a two-term limit for presidents.