Leaders in the Seychelles National Assembly react to presidential address 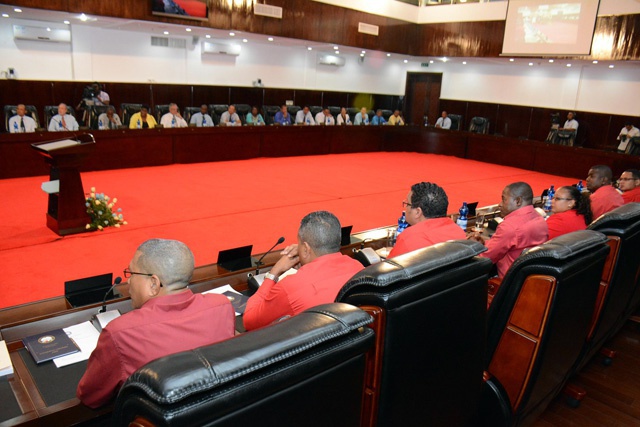 (Seychelles News Agency) - The leaders of the opposition and the government business on Thursday gave their reactions to the address of the Seychelles President Danny Faure made earlier this week.

For the first time since he was sworn in, the head of state of Seychelles, an archipelago in the western Indian Ocean, spoke to the Assembly on Tuesday, giving details on his plan of work.

Leader of the opposition

Wavel Ramkalawan, leader of the opposition, started by saying, “I am happy that finally, everything I was looking for Seychelles and Seychellois has become a reality, and I hope that all the words are translated into actions.”

Ramkalawan said it is important to mention that through victimisation, many young people including those who have studied and got good results have not been able to realise their dreams.

When talking about housing, Ramkalawan said, “I would like to say that the 4,911 people who have contributed and are on a list, needs to immediately know exactly where they stand.”

He called on all Seychellois who feel that there is any victimisation going on in any form to contact the office of the speaker of the national assembly.

On security clearance, Ramkalawan was happy that government accepted that it exists. “Security clearance is something that exists in determining whether or not someone gets employed.”

He welcomed President Faure's statement that security clearance will be based solely on criminal records.

The leader of the opposition said telephone privacy must also be respected.

On the declaration of assets, Ramkawalan said, “It is important for us to realise that it’s not only politicians who participate in corrupt activities, that other officials can also be part of corrupt practices.”

On truth, unity and national reconciliation, Ramakalwan says he has requested the setting up of a national commission to close the chapter for families hurt through actions done in the past, so they get closure once and for all.

He also spoke on the drug issue, “I believe that the national assembly has a role to help the government in this fight. I ask that a meeting is set up with NDEA and the government to discuss what measures are needed to fight and eliminate the drug problem.”

The leader of government business, Charles Decommarmond welcomed the President’s decision to meet the various stakeholders for discussions.

On the review of the ministries, De Commarmond said that the schools and health centres’ administration should be left to the persons in charge and the communities while the ministries focus on policies.

“When a community participates they feel like part and parcel of the entity that is providing them with a service,” said Decommarmond.

He proposed a review of the accessible hours of some services. “We need to relook at the time certain services are provided in our country to facilitate people who will need access during their lunch break as is requested by their employers.”

Decommarmond supported the points on housing saying it's a big problem that will persist as there are more people needing houses than houses being built. He added that the system of allocating houses need to be fair and the whole way it’s done reviewed.

On security clearance, he said, “It’s an issue that we need to talk more about it, to find out what we need to take into consideration,” as he believes some employers are using it as an excuse, while people with bad employment record were not being taken to task.

Decommarmond said he agrees with the declaration of assets and that this needs to go down to other levels.

Other areas he mentioned for review were the role of coastguards and the National Drug Enforcement Agency (NDEA) to have more border control and help combat the drug problem.

He said the drug problem is affecting tenants in housing estates and there is the need to find a way to deal with this issue.

On money not being collected Decommarmond said the government should strengthen  the Seychelles Revenue Commission to maximise the collection of revenue.

He also said there is the need to re-look at how welfare assistance is given. “A single mother who really needs assistance does not get it while somebody who is unemployed gets full assistance.” This situation, he said, cannot go on.

Decommarmond touched on Freedom of Information saying that the social media needs to be included.

“All of us at one point were victims of the social media, so this should also be dealt with so that our people feel secure in our country.”

He ended in saying that to transcend what has been said into actions, the Assembly need to give support to the President’s proposed team.

President Faure has already submitted the names of his new vice president and ministers to the speaker which will be presented to the members of the assembly for approval.