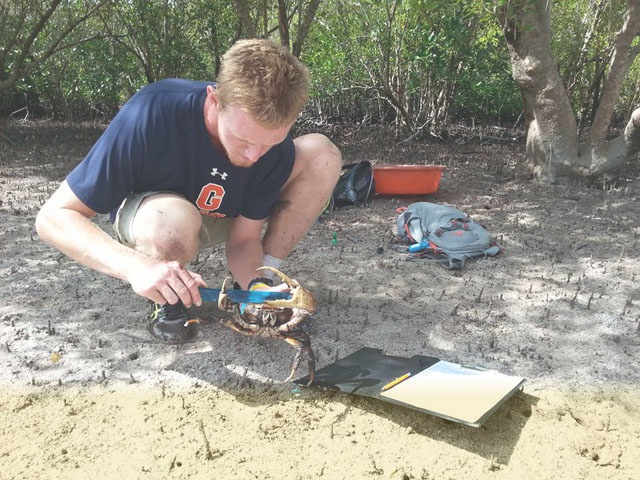 A total of 242 brown land crabs were caught, measured, marked, and released.during the month of August on Curieuse Island. (GVI)

(Seychelles News Agency) - Are the brown land crabs on Curieuse Island shunning their mating duties? A new study has found that the crabs are aging and predominantly male.

Global Vision International (GVI) - an environment non-governmental organisation, - gathered data over the month of August to better understand the population structure of the species. GVI runs a research programme on the island in collaboration with Seychelles National Parks Authority (SNPA).

GVI’s science coordinator on Curieuse, Peter Kowalski, told SNA “the study suggests that this could represent an ageing population of the brown land crabs.”

Found on most the Seychelles islands, the brown land crabs [Cardisoma carnifex] are common to the coastal regions from east Africa to the Red Sea.

Attracting little culinary interest -- although edible -- the crustaceans can have shells as wide as 12cm. Mainly herbivorous, the brown land crab, with its reddish to chestnut brown colour and bright yellow pincers, are often seen hurrying around mangrove forests and coastal areas.

The mangrove forest at Baie Laraie -- one of the main beach on Curieuse - was therefore the perfect place for the GVI team to get hold of the crabs.

With the help of an American intern, Cody Kiefer, 242 of the brown land crabs known as ‘Tyangoman’ in the Creole language were caught, measured, marked, and released.

Kowalski said that “64 percent were male and 36 percent were female” adding that very few juveniles were captured.

According to Kowalski, these trends could mean that the habitat of the juveniles, which can live in deep crab holes at early life stages were difficult to sample.

Another possibility he said is that “many island-dwelling land crab species release their larvae into the ocean. These planktonic larvae are influenced by ocean currents and can face uncertainty in reaching relatively small islands such as Curieuse.”

This is the first study of the brown land crabs on Curieuse -- a former leper colony that received the status of a National Park in 1979.

GVI concluded that more in-depth studies need to be conducted in order to better understand the population of the crustaceans, which Kowalski said is of ecological importance.

“This species plays a critical role in energy assimilation by their consumption of leaf litter in the mangroves, and they also promote soil drainage and aeration by creating their burrows,” he said.

Seychelles is said to have at least 32 species of land, shore, brackish water and freshwater crabs – excluding marine crabs that live in the sea. The largest of the archipelago’s land crab is the coconut crab, which can weigh as much as four kilograms.