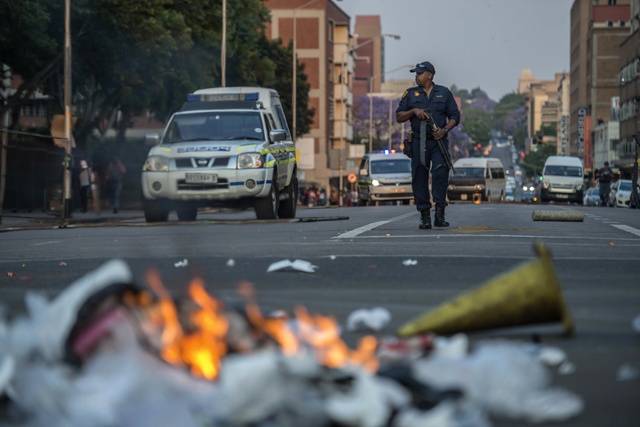 A South African policeman patrols after skirmishes with South African students during a protest march towards the Union Buildings to call for free higher education on October 20, 2016 in Pretoria. (MUJAHID SAFODIEN/AFP)

The students had planned to deliver a list of demands to Zuma's office at the Union Buildings in the latest stage of weeks of often violent demonstrations.

But police in riot gear prevented about 500 students from approaching the buildings, with some protesters trying to force their way through high fences.

The students held posters saying "Free education for all", "South Africa is radically unequal" and "We want peace and free education".

Stun grenades were fired after the students threw objects at the police.

The march was part of a wave of unrest at universities around the country, as students protest against fee increases that they say force poor students out of education.

Students have torched buildings in several institutions and dozens have been arrested during daily running battles on campuses in Johannesburg, Cape Town, Pietermaritzburg and elsewhere.

The violence has forced some universities to close, disrupting the completion of the academic year.

Student protests began last year, when many so-called "born frees" -- who grew up after apartheid -- staged huge demonstrations which forced the government to abandon planned fee hikes for 2016.