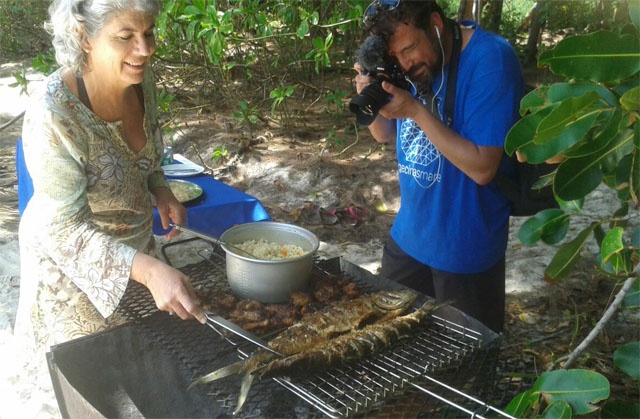 Emilia Vidot, from Argentina who has been living in Seychelles for the past 21 years showed Marin the different uses of the coconut and how one goes about preparing a barbecue in the island nation. (Emilia Vidot)

(Seychelles News Agency) - Seychelles will feature in a 24-minute programme on the Elgourmet channel later this year, following the visit of Pepe Marin, a journalist who films the best Latin American chefs in action.

Marin however made other discoveries he intends to share with the world -- he could hardly believe that in Seychelles, an archipelago in the western Indian Ocean, there is a tradition of eating flying foxes or bats.

“I could not believe it! They had it in a dish!” said Marin to SNA.

In Seychelles, the flying mammal is a delicacy eaten mainly cooked in curry or civet (cooked in red wine) and this acquired taste will be part of the cosmos of flavours in the fourth season of the transnational programme broadcast on the Elgourmet channel.

The Seychelles chapter on Elgourmet will be aired to 25 million viewers in Latin America and worldwide in December.

Through the programme -- aimed at housewives and professionals in the kitchen -- viewers will not only see Latin American chefs in action in Seychelles, but also catch a glimpse of the capital, Victoria, the markets, beaches and exotic giant palms.

“It was very difficult to find Latin Americans living in such an exotic place like Seychelles,” said Marin, adding that he is sure that the viewers will be impressed with what he will show them in this episode.

Although not a professional chef, Emilia Vidot, from Argentina, has been living in Seychelles for the past 21 years and she also had her bit to share with Marin.

“I showed him how we value coconut. From when it is de-husked, grated, the extraction of the milk and the different uses,” says Vidot, who owns a small guesthouse on Praslin, the second-most populated island of the archipelago.

“A barbeque on Sunday is also a family tradition in Argentina, so we showed the viewer’s how it’s done here in Seychelles!”

On Mahe, the most-populated island, Marin was fortunate to meet a Brazilian residing on the island and two Mexicans working at ‘The H Resort’ a 5-star establishment at Beau Vallon -- a well-known tourist area.

Manuel Gastelum, Chef de Cuisine at Resort’s Trader Vic’s restaurant, has been working in Seychelles for almost a year together with his compatriot Ximena Lopez, manager of the restaurant.

Gastelum told SNA it is a great experience to be part of the programme and a “Latin American chef trying to make a living abroad”.

“I felt very excited to have the chance to talk about our lifestyle here in Seychelles, its natural resources, culture and most important its culinary heritage,” he said, but at the same time, he has to face the obstacles and challenges of working in a different country with a different cultural environment.

The Seychelles islands were the last leg of Marin’s latest filming trip which began almost two months ago in Amsterdam, the capital city of the Netherlands, Malta, Finland and Kenya.

Women's Day: A painter finds inspiration in the islands