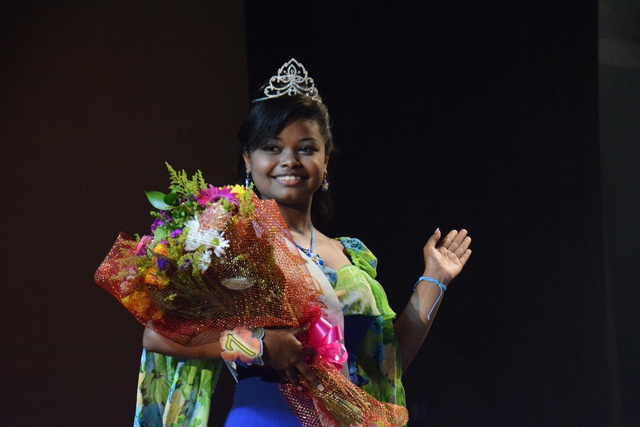 The new Miss Creole des Iles International Omegan Jean-Marie Ciseau will be at the helm of various activities during the 31st edition of ‘Festival Kreol.' (Joena Bonnelame, Seychelles News Agency)

Ciseau was selected out of ten contestants by a panel of six judges at the crowning ceremony which took place at the International Conference Centre of Seychelles, an archipelago of 115 islands in the western Indian Ocean. She succeeds Debbie Horsman.

Speaking to the media after the crowning ceremony, Ciseau said, “I am so happy that I managed to win tonight thanks to the support from my parents and my friends as well as my colleagues from the pageant.”

Romakira Gonthier was crowned First Princess, and Elisa Larue was the Second Princess.

There were other prizes awarded during the pageant.

Melanie Sinon was crowned Miss Personality as voted by her fellow contestants. Miss Photogenic was Kanisha Dogley, while Best Evening  went to Elisa Larue Melanie. Romakira Gonthier won the People’s Choice award, chosen by the general public a week before the pageant via SMS text messages.

Ciseau, who is in her second year at the School for Business Studies and Accounting, also won the prize for ‘Best Project’ which is geared towards sensitising young people on the traditional dances of Seychelles.

“What I am going to do now is to set up my project. I know that some of our young people do not know much about our traditional dances such as the ‘kanmtole’ and ‘moutya’, so I want to do my part to help them learn a bit more,” Ciseau said.

The pageant started with contestants dancing the traditional ‘kanmtole’ and later showed off their ability to dance the moutia – a rhythmic sound that got the crowd on their feet.

During the six weeks training programme for the pageant, all contestants learned the traditional dances and designed their evening wear.

The ‘Miss Creole Des Iles International’ pageant was revamped last year by the Telly’s Modelling Agency with the aim of reviving the former 'Miss Kreol' pageant, which debuted in 1994 as part of the activities for the ‘Festival Kreol that takes place in October every year.

The organiser of the pageant, Terry Carolla, also the director of Telly’s Modelling Agency, told SNA that plans to have young ladies from the western Indian Ocean region to participate in the local pageant is still underway.

"At this point in time, all regional islands have taken the initiative to organize a Miss Creole Pageant so that they can have a contestant for next year,” said Carolla.

As for Ciseau, the new Miss Creole des Iles International, she will be at the helm of various activities during the 31st edition of ‘Festival Kreol’ which started on Friday.