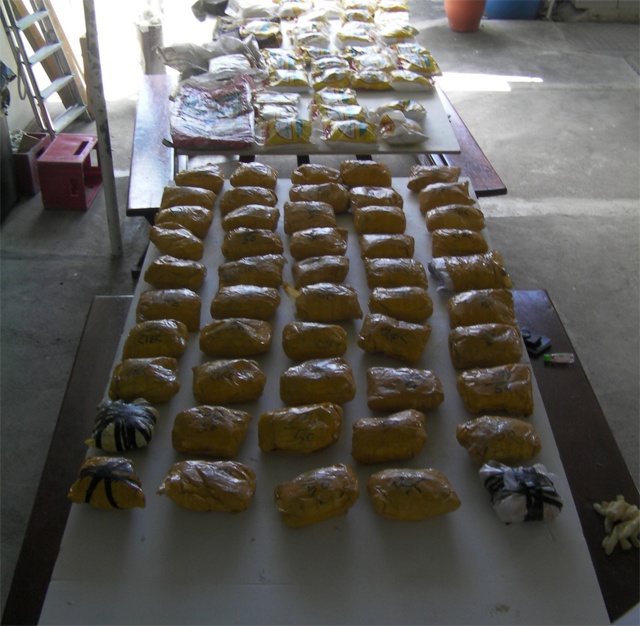 Partial view of the 98.5kg of illegal drugs divided into small packages, that were destroyed by incineration on Saturday. (NDEA)

The archipelago’s anti-narcotics agency said the drugs seized in April this year had a street value of almost $26 million (344 million Seychelles rupees).

The destruction of the 98.5kg of drugs -- mainly heroin and a small quantity of cocaine and opium -- was done by order the Supreme Court, upon joint counsel of the prosecution and defense counsels in the case.

The drugs were seized during a joint sea operation by the NDEA and the Seychelles Coast Guard and is believed to be the largest consignment of drugs ever seized in Seychelles' territorial waters.

In a statement on Saturday, the National Drugs Enforcement Agency, the NDEA, said “the order was made after details of the exhibit were admitted during the trial, thereby allowing the destruction of the exhibit in accordance with recent provisions introduced under the 2016 Misuse of Drugs Act.”

The drugs were incinerated in the presence of both the prosecution and defense counsels as well as officials of the judiciary, police and NDEA.

It was on April 16 this year that the NDEA and coast guard intercepted a dhow -- a type of sailing vessel common to the Gulf Arab states -- with 11 Iranians onboard. The vessel was caught off the coast of Bird Island, which is located some 100 kilometers from Mahé, the main island.

The consignment of illegal drugs was discovered onboard the dhow after it was escorted to the Seychelles Port Victoria.

The NDEA statement on Saturday said investigations have shown that the seizure disrupted what appears to have been the second of four attempts to import large quantities of drugs into Seychelles this year.

“Three of those attempts have been disrupted and those behind one of the attempts are awaiting trial on conspiracy charges,” the statement reads.

“Evidence collected during these investigations revealed that locally based drug dealers, operating in direct contact with foreign traffickers in Asia had acquired high speed boats that were used and intended to be used to ferry the drugs from craft originating from the eastern Asian coast,” the statement adds.

Out of 11 Iranian sailors arrested in connection with the April bust, the prosecution withdrew charges against eight of them, including a minor, earlier in October, after they could not be linked to the drugs.

The three others -- the captain, the son of the ship’s owner and a sailor – will stand trial as the prosecution has maintained charges of two counts of importing and trafficking of controlled drugs against them.