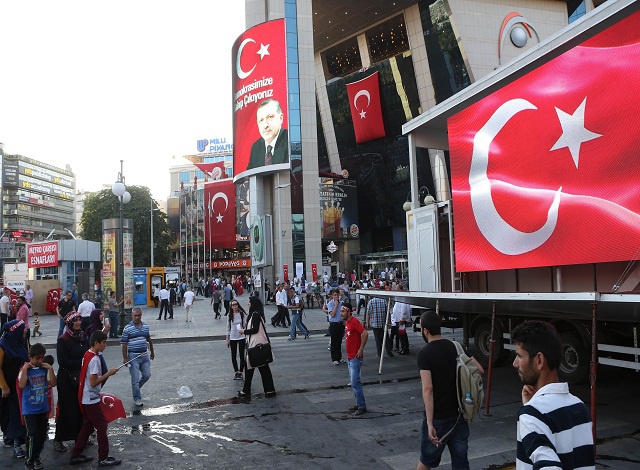 Pro-Erdogan supporters gather during a rally against the military coup at Kizilay Square in Ankara, on July 25, 2016. Turkish authorities on July 25 issued arrest warrants for over 40 journalists in a new phase of the controversial legal crackdown after the failed coup against President Recep Tayyip Erdogan, sparking fresh alarm over the scope of the detentions. (ADEM ALTAN / AFP)

(AFP) - Turkey has arrested more than 35,000 people over alleged links to the group run by the US-based preacher Fethullah Gulen, who is blamed for the failed July coup, local media reported Sunday.

Turkish Justice Minister Bekir Bozdag said the suspects had been placed under arrest since the attempted putsch that fell apart within hours, quoted by NTV broadcaster.

Another 3,907 suspects were still being sought while nearly 26,000 people had been released into "judicial control", he said.

Some 82,000 individuals had been investigated in total since the coup bid, he told the audience on Saturday at a ruling Justice and Development Party conference in Afyonkarahisar, western Turkey.

Tens of thousands of people have been suspended, sacked or detained in the military, judiciary, police, education sector and media in connection with the July 15 attempted putsch blamed on Gulen and his Hizmet (Service) movement.

The unprecedented purge has come under heavy criticism from Turkey's Western allies, including the European Union. Brussels has urged Ankara to act within the rule of law, which Turkey insists it is.

Ankara accuses Gulen of masterminding the coup, during which a rogue military faction tried to oust President Recep Tayyip Erdogan.

Gulen -- who has lived in self-imposed exile since 1999 in Pennsylvania -- strongly denies the charges.