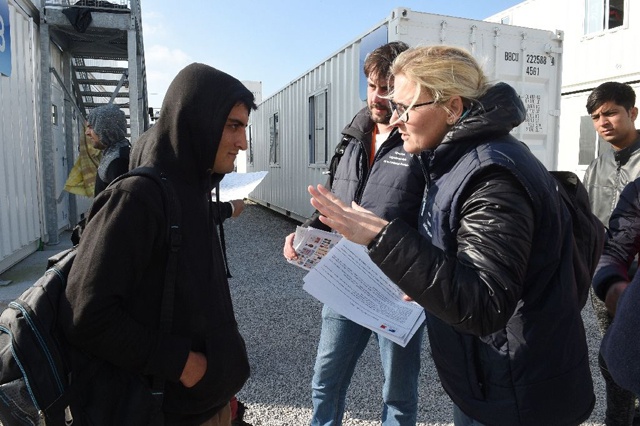 Employees of France's 'Department for Social Cohesion and Protection of the Population' distribute documents to migrants on the "Jungle" camp's demolition at a reception centre in Calais, northern France, on October 23, 2016. (AFP Photo/Francois Lo Presti

(AFP) - French authorities will on Monday begin moving thousands of people out of the notorious Calais Jungle before demolishing the camp that has served as a launchpad for attempts to sneak into Britain.

A major three-day operation is planned to clear the sprawling shanty town near Calais port -- a symbol of Europe’s failure to resolve its migrant crisis -- of its estimated 6,000-8,000 occupants.

More than 1,200 police officers will be deployed to prevent any unrest as the migrants are directed to buses that will take them to temporary shelters nationwide where they can seek asylum.

The closure of the squalid camp is aimed at relieving tensions in the Calais area, where clashes between police and migrants trying to climb onto trucks heading to Britain are an almost nightly occurrence.

As officials and charity workers spread out across the Jungle on Sunday distributing flyers about the camp's impending demolition, some were still clinging to hopes of a new life across the Channel.

"They'll have to force us to leave. We want to go to Britain," said Karhazi, a young Afghan among many of the migrants who had their hearts set on Britain, believing it to offer better prospects.

"We have yet to convince some people to accept accommodation and give up their dream of Britain. That's the hardest part," Didier Leschi, head of the French immigration office OFII told AFP.

Aid agencies have warned that some migrants could try resist being relocated.

There were riots when French authorities razed the southern half of the settlement in March.

A Syrian man named Sam who spent 13 months in the Jungle told AFP he had fled the camp on Saturday night to an undisclosed location about 12 kilometres (seven miles) away where he said "dozens" of migrants were hiding out to avoid being moved.

But as winter sets in and the rain turns part of the Jungle into a swamp, some residents have cautiously welcomed the chance of a warm bed.

"The officials say tomorrow is the beginning of something better. Let's hope this is true," Faisal al-Ajab, a 39-year-old Sudanese man who has already applied for asylum in France but is still waiting for housing, said.

The flyers distributed on Sunday instructed the migrants in Arabic, Tigrinya, Pashto and other languages to show up at a hangar next to the camp from 8:00 am on Monday (0600 GMT) with their luggage.

There they will be separated into four groups for families, single men, unaccompanied minors and other people considered vulnerable before boarding one of 60 buses that will take them to nearly 300 shelters nationwide.

British officials have been racing to process child refugees seeking to be transferred to Britain before they become scattered throughout France.

By Saturday, the number of minors given a one-way ticket to Britain under a fast-tracked process for children launched a week ago stood at 194, according to France Terre d'Asile, a charity helping in the process.

Most have relatives across the Channel but 53 girls without family in Britain also departed France at the weekend.

A spokesman for Britain’s interior ministry confirmed it had "now started the process of taking in those children without close family links".

Adult migrants with relatives in Britain have complained about being left out in the cold. Some have vowed to keep trying to stow away on a truck or to jump onto a train entering the Channel Tunnel.

Dozens of migrants have died in such attempts.

The dire security and humanitarian situation in the Jungle — situated on a former rubbish dump where migrants first established a camp in the early 2000s — has long been a bone of contention between France and Britain.

The centre-right front-runner in next year’s French presidential election, Alain Juppe, has called for Britain’s border with France, which was extended to Calais under a 2003 accord, to be moved back to British soil.