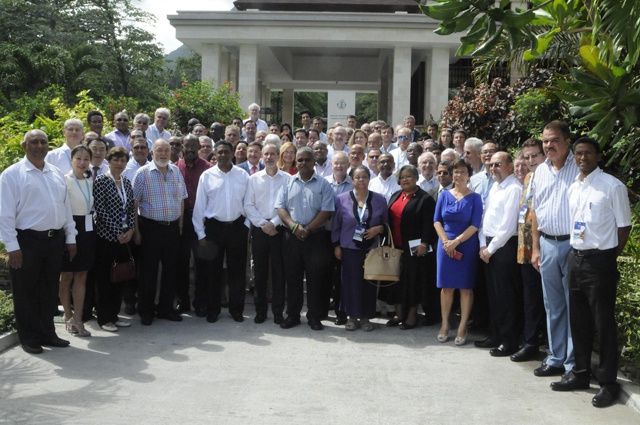 Souvenir photo of the honorary consuls and consuls general together with President Danny Faure and other guests at the opening of the conference. (Louis Toussaint, Seychelles News Agency)

(Seychelles News Agency) - The Seychelles President Danny Faure on Monday called for the expansion of the country’s network of honorary consuls and consuls general to countries and key cities where the archipelago is yet to have any diplomatic representation.

“To be a winner in a globalized world order, Seychelles will have to seize opportunities coming its way and take initiatives to advance its own agenda in a win-win context with other countries, regional bodies or international organizations,” said Faure.

“As foot soldiers of Seychelles’ foreign service, you are duty-bound to scout for these opportunities and advise the Ministry of Foreign Affairs on initiatives it can take,” he told honorary consuls and consuls general gathered at the meeting.

The conference, which is taking place at the Savoy Resort and Spa, in Beau Vallon, a northern district of the Seychelles main island, Mahe, is being held under the theme ‘Enhancing Seychelles International Engagement.’

Foreign Affairs and Transport Minister Joel Morgan who has called on the consuls to be pro-active, told reporters that the conference will also help to align them with the vision of the government of the day.

Morgan said: “We are showing them the existing opportunities in Seychelles that can bring about benefits in various fields from financial, economic, development, cooperation, socio-cultural, sports, among others.”

The aim, he said, is to help establish linkages between Seychelles and the countries where the diplomatic representatives are based while emphasizing on the need to focus on people-centred development.

Discussions between Monday and Wednesday will also focus on the national development strategy, championing of the Blue Economy, exploration of Seychelles' role on climate change, human trafficking, challenges of small and medium enterprises, fisheries and tourism.

President Faure has said that the honorary consuls and consuls general play an important role in protecting the interests of Seychellois nationals and promoting Seychelles’ in their respective consular jurisdictions across the globe.

“Your role even goes beyond the traditional confines of consuls. From time to time, you are called upon to take on certain diplomatic responsibilities. The limited number of our diplomatic missions, their size and very hectic schedules necessitates that,” said the Seychellois head of state.

“Through the execution of this secondary function, you have given greater reach to our marketing drive, promoting Seychelles as a well sought-after tourist destination. In doing so, you have contributed your fair share to the success of our economic diplomacy.”

President Faure said that Seychelles’ role and image has been enhanced in the international arena under the leadership of his predecessor, former President Michel, adding that the island nation has a strong and respected voice in the concert of nations.

The Seychellois head of state reiterated his emphasis on the need for his new government to be guided by the three principles of good governance, transparency and accountability, while promoting sustainable growth and defending the ideals of fairness, equality in opportunity, social justice and distribution of wealth, adding that “the actions of the Seychellois diplomacy must, naturally, continue to be part of this dynamic.”

Seychelles, a 115-island archipelago in the western Indian Ocean, appoints honorary consuls and consuls general to countries where it does not have permanent missions.

They meet every two years, to gather new information about the country, as well as to exchange ideas with government officials, private sector representatives and the island nation’s ambassadors.

Seychelles has 91 honorary consuls and 12 consuls general around the world and 63 of them are attending the conference.