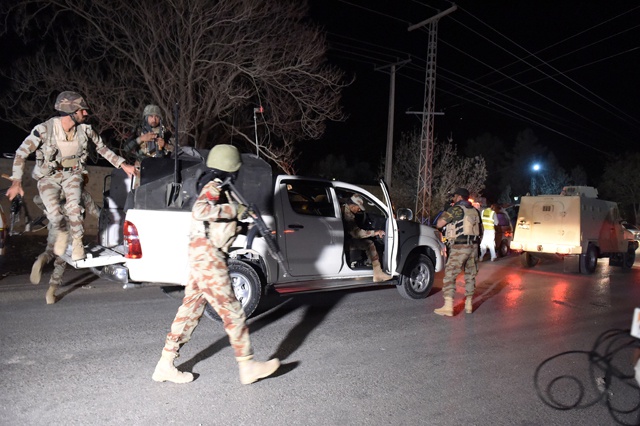 Three gunmen from a Pakistani Taliban-linked group burst into the sprawling academy, targeting sleeping quarters that are home to some 700 recruits, sending terrified young men fleeing.

"I saw three men in camouflage whose faces were hidden carrying Kalashnikovs," one cadet told reporters. "They started firing and entered the dormitory but I managed to escape over a wall."

The attack on the Balochistan Police College, around 20 kilometres east of provincial capital Quetta, began at around 11:10 pm (1810 GMT) Monday, with gunfire continuing to ring out at the site for several hours.

"They first targeted the watch tower sentry, and after exchanging fire, killed him and were able to enter the academy grounds," he said.

He later tweeted that the death toll stood at 44 while 118 had been wounded, making the attack the third deadliest in Pakistan this year.

Major General Sher Afgan, chief of the paramilitary Frontier Corps in Balochistan, which led the counter-operation, said "the attack was over in around three hours after we arrived".

He added that communications intercepts showed the militants belonged to the Al-Alimi faction of the Lashkar-e-Jhangvi militant group -- which is affiliated with the Pakistani Taliban.

"They were in communication with operatives in Afghanistan," he said. The group itself has not claimed the attack.

Bugti said the compound was home to some 700 recruits, hundreds of whom were rescued.

The area was plunged into darkness when the counter-offensive was launched, while security personnel threw up a cordon and ambulances zoomed in and out, taking the injured to hospitals. Military helicopters circled overhead.

As the battle continued, police and civil administration officials at the site told AFP they had heard several loud blasts.

Mineral-rich but impoverished Balochistan, Pakistan's largest province, is beset by sectarian strife, Islamist violence and an on-off separatist insurgency that has lasted for decades.

The army has also repeatedly been accused by international rights groups of abuses in Balochistan, particularly against nationalists demanding autonomy and a greater share of the region's resources.

In August, a suicide bombing at a Quetta hospital claimed by the Islamic State group and the Jamaat-ul-Ahrar faction of the Pakistani Taliban killed 73 people, including many of the city's lawyer community who had gone there to mourn the fatal shooting of a colleague.

Pakistan has been battling an Islamist insurgency since shortly after it decided to ally with the US following its invasion of Afghanistan in 2001.

Violence has declined in recent years following a series of military offensives in the northwest border areas as well as concerted efforts to block the militants' sources of funding.

But the remnants of militant groups are still able to carry out periodic bloody attacks, particularly in the northwest.

Monday night's attack also came a day after separatist gunmen for the Baloch Liberation Army on a motorcycle shot dead two coast guards and a civilian and wounded a shopkeeper in a remote southwest coastal town in the same province.

Security problems have mired CPEC in the past with numerous separatist attacks, but China has said it is confident the Pakistani military is in control.