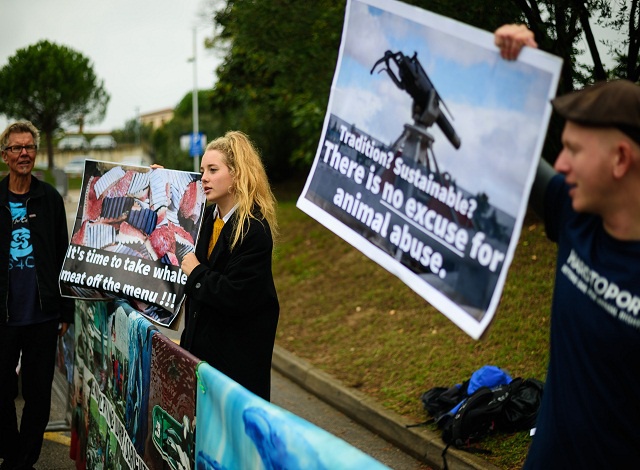 Protestors hold up a placard reading 'It's time to take whale meat off the menu' as they demonstrate during the 66th International Whaling Commission (IWC) meeting in Portoroz, Slovenia, on October 24, 2016. More than 80 nations will discuss the fate of the world's remaining whales, which are facing a multitude perils from meat hunters and ship strikes to getting snared in fishing gear. (Jure MAKOVEC / AFP)

(AFP) - Whaling nations defeated a renewed bid Tuesday by southern hemisphere states to create an Atlantic sanctuary for the marine mammals hunted to near extinction in the 20th century.

A proposal by Argentina, Brazil, Gabon, South Africa and Uruguay, which needed a 75 percent majority, mustered only 38 yes votes out of 64 cast at an International Whaling Commission meeting, an outcome lamented by conservationists.

Its main detractors were whalers Japan, Norway and Iceland -- with backing from a number of African, Asian and small island states.

"With all the problems currently facing whale populations that have previously been devastated by commercial whaling, it is clear they need a protected zone where they will be able not just to survive, but to rebuild and thrive," said Greenpeace whale expert John Frizell.

"What is the most disappointing is that all these efforts are ultimately being undermined by IWC member countries who are thousands of miles away, not even in the southern hemisphere and some even on the other side of the world."

The proposal, backed by countries which depend on whale-watching tourist dollars, has been shot down at every IWC meeting since it was first introduced in 2001.

"It is very disappointing that once again, a proposal for a South Atlantic Whale Sanctuary has been harpooned," said Matt Collins of the International Fund for Animal Welfare.

"A sanctuary in this region would have provided strong protection to a wide range of whale and dolphin species."

Backers say about 71 percent of an estimated three million whales killed around the world between 1900 and 1999 were taken in southern hemisphere waters.

The most targeted species were fin, sperm, blue, humpback, sei and minke whales, they say -- and many populations are still recovering under a 30-year old moratorium on all but aboriginal whale hunting.

According to the proposal filed with the commission, the sanctuary would "promote the biodiversity, conservation and non-lethal utilisation of whale resources in the South Atlantic Ocean".

But Japan, under fire for its annual whale hunts in the name of science, which critics say is a cover for commercial whaling, expressed vehement opposition.

Tokyo argues that stocks of some species have recovered sufficiently to make them fair game for hunters, and that simply declaring all whales off-limits was not in line with environmental imperatives.

"This proposal is against the principle of sustainable utilisation of marine living resources," he said of the sanctuary.

Two other sanctuaries exist today, in the Indian Ocean and the Southern Ocean -- where Japan conducts some of its hunts.

New Zealand and Australia have submitted a proposal for scientific whale hunts, such as those Japan says it conducts, to be much more closely scrutinised.

While there are no reports of hunting in the South Atlantic today, Brazil's IWC commissioner Hermano Ribeiro told AFP on Monday a sanctuary would provide "some kind of security".

"There is a whale killing and catching in the (Southern Ocean), who may tell us that if a particular species begins to be depleted the whale-catchers for science will not come to the South Atlantic?

Whale-watching is an estimated $2-billion-dollar-a-year (1.8-billion-euro) industry, employing some 13,000 people around the world.

There are an estimated 51 species of cetaceans -- whales, dolphins and porpoises -- in the South Atlantic.

A third of global tree species threatened with extinction