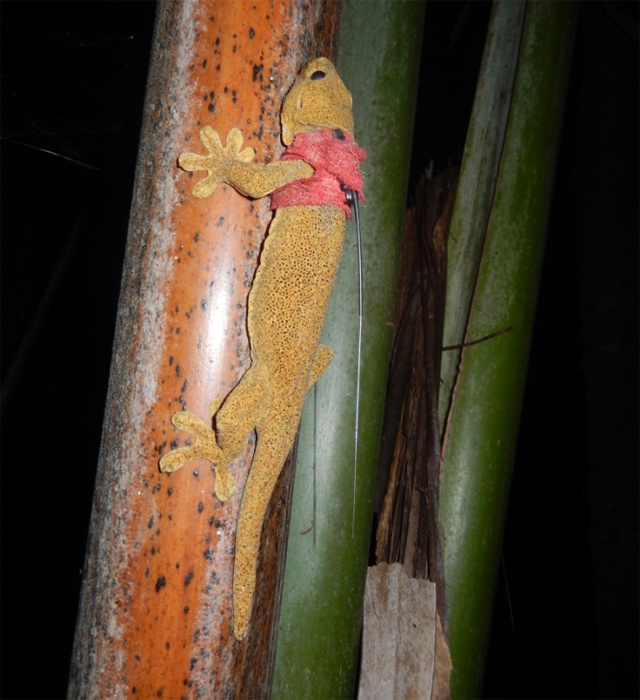 (Seychelles News Agency) - All reptiles have a somewhat prehistoric air about them, but this elusive creature looks like something right out of the age of dinosaurs.

An academic study of Seychelles' giant bronze gecko has afforded conservationists a greater understanding of this species with leathery, wrinkly skin. Endemic to the Seychelles' island of Praslin’s endangered coco-de-mer palm forests, the vulnerable giant bronze gecko seems more like a close relative of the Komodo dragon from the Galapagos Islands than a gecko.

The aptly-named Chris Tagg -- a British student from the University of Bournemouth -- has completed his MSc dissertation on the giant bronze gecko (Ailuronyx trachygaster) in the UNESCO World Heritage Site of the Vallée de Mai, on the Seychelles’ archipelago’s second-largest island of Praslin.

In just a few months of fieldwork this year, Tagg tracked, caught a total of 666 geckos and -- yes -- tagged a 214 of them in the Vallée de Mai.

Tagg previously completed a BSc in ecology and wildlife conservation, but speaking to SNA in an email interview said his main interest was in studying herpetological (reptiles and amphibians) species and birds.

“The giant bronze gecko is a highly interesting species to study and I was very fortunate to be offered an opportunity to do so,” he told SNA.

Giant bronze geckos were caught and sampled for the first time only in 2011. The reptile is known to prefer to stay high above the ground, while its sandy-bronze colouration acts as a camouflage against the stems and branches of the coco-de-mer palm -- its preferred tree.

To carry out his research, Tagg had a small team of helpers on hand from the Seychelles Islands Foundation, which manages the two UNESCO World Heritage Sites of the Vallée de Mai and the world-famous Aldabra Atoll.

Captured geckos were measured, their genders identified, and a DNA sample taken by the research team. Additionally, they were also tagged with subcutaneous Passive Integrated Transponders (PIT) tags which identifies individuals with a unique ‘barcode’ that can be read with a scanner when recaptured. A number of adult geckos were also fitted with radio transmitters, attached by a small ‘backpack’ that holds the transmitter snugly on the gecko’s back.

Tagg and his team then tracked the grinning geckos several times a day, five days a week in between the endemic coco-de-mer palms - all with the intention of finding out more about how far the giant geckos roam in the Vallée de Mai.

“The radio backpacks were the main method of tracking them and seeing how far they roam,” said Tagg. “This was challenging. The large palm leaves of the coco de mer bounce the radio signal all over the place which is further exacerbated if you happen to be on or near a slope! It was like working in a hall of mirrors. It was possible but it took a lot of patience and effort!”

The main aim of this project, explained Tagg, was to assess the population size of the geckos within the Vallée de Mai and the home range size of individual adult geckos. As a result of his research, Tagg has estimated the total population within the Vallée de Mai to be somewhere between 1,594 and 2,364 giant bronze geckos, but says this figure will still need to be fine-tuned.

The radio-tracking data showed that home range size of the geckos varied between individuals but male and female home range size was similar, unlike in other gecko species where males normally have much larger home ranges.

“A rough estimate in 2004 put the total giant bronze gecko population at 4,846, but it seems likely that the overall population is lower given our recent population estimate undertaken in the Vallée de Mai, which offers the best habitat for the geckos.”

Tagg believes that aside of Vallée de Mai, the geckos can also be found in privately-owned coco-de-mer palm forests of Fond Ferdinand and Fond Peper – on Praslin Island.

At the end of his research the British student recounted that he has encountered several surprises in coming to Seychelles, although the most unexpected aspect was the subject of his studies – the geckos themselves.

“They were full of surprises ranging from the way they interacted with each other to getting a close look at their perpetual grin! They are a truly unique and special species and deserve all the support and protection they can get.”