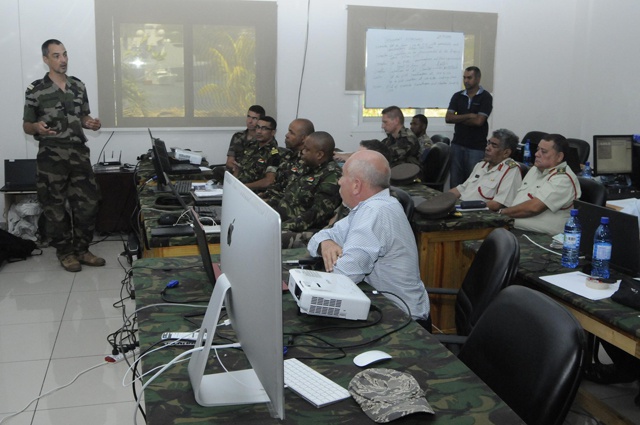 The officers involved are not only sharing expertise and tactical know-how but are also being trained on all aspects of how to plan, command control and deploy a joint military operation. (Louis Toussaint, Seychelles News Agency)

(Seychelles News Agency) - The fight against drug trafficking is the focus of the 2016 edition of a military exercise held every two years between the Seychelles and French armed forces, a military spokesperson has said.

“We have focused on the piracy theme a few times before, and this time around decided to shift to drug trafficking,” Lieutenant Colonel Jean Attala of the Seychelles People’s Defense Forces (SPDF) told SNA on Tuesday.

“These are all common and real problems that many countries are facing, thus it is important for them to be addressed,” he added.

Nearly 150 military personnel of the SPDF and the ‘Forces Armees dans la Zone Sud de L'ocean Indien,’[the French armed forces based in the South of the Indian Ocean, (FAZSOI)] are taking part in the 2016 ‘Cateau Noir’ exercise. The five-day collaboration started on Monday.

The make-believe scenario involves a military intervention to dismantle a drug trafficking gang that has set up base on the west coast of Mahe, the Seychelles main Island

The exercise is testing the land, sea and air competences and responses of the two forces, with the involvement of a French patrol vessel ‘Le Malin’, a French military aircraft as well as a Seychelles Coast Guard vessel and Dornier aircraft.

The officers involved are not only sharing expertise and tactical know-how but are also being trained on all aspects of how to plan, command control and deploy a joint military operation.

Attala explained to SNA that since 2014 the two sides decided to raise the complexity of the ‘Cateau Noir exercise,’ which was previously purely tactical, "by introducing the command post where the officers get to prepare, command and execute the mission,” Attala said.

“By doing this, the forces on the ground will know exactly how many enemies are involved, their strength and location. Our forces will be in a better position to execute the mission and neutralize the enemy,” said Attala.

‘Cateau Noir’ is named after the Seychelles black parrot – an endemic bird of Seychelles.

High military officials of both forces on Tuesday visited the command post of the operation. Both sides believe that the collaboration has helped to strengthen relations between the two forces, as well as between Seychelles and France.

Lieutenant Commander Fabrice from the French armed forces described Seychelles as an important partner in the region that has all the elements needed for such military operations.

“As an armed forces based in the Indian Ocean, we are ready to intervene if something happens in the region, and today we have learnt that we can easily work with Seychelles because we understand how to work together,” said Fabrice.

Aside of the military exercise, the cooperation which exists between the SPDF and the regional French forces also allows for practical exchanges benefitting members of both sides.

One example is the possibility for ‘TAZAR’ [the Seychelles special forces] to undertake paratrooper training in Reunion  Island. The landing of paratroopers was expected to be part on the ongoing exercise which ends on Friday.