Ruled by the tides: Seychelles' atoll of Aldabra gets its own tidal app 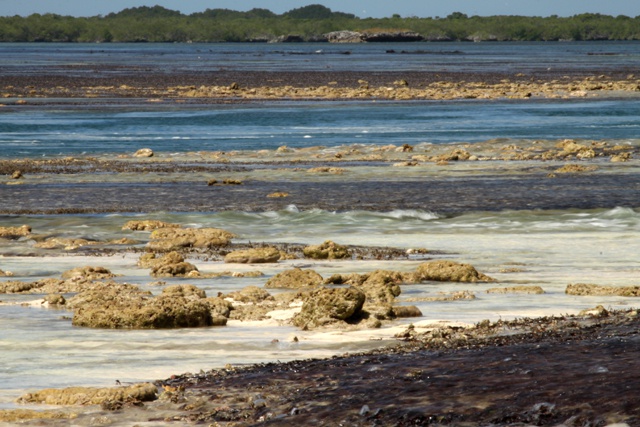 Low tide in the lagoon at Aldabra (R Baxter)

(Seychelles News Agency) - The Seychelles Islands Foundation (SIF), which manages the raised coral atoll of Aldabra, has recently developed a mobile app with accurate tidal information for the remote atoll.

Located in the easternmost reaches of the 115-island archipelago of Seychelles, Aldabra has four main islands situated around a central lagoon. A hundred million cubic metres of water rush in and out of the atoll’s tidal channels four times a day to either fill or empty the lagoon. With two high tides and two low tides daily, it can be notoriously difficult to land supplies on the jagged coralline shores of Aldabra by boat.

April Burt, SIF’s Aldabra Scientific Coordinator, told SNA in an email interview that life on Aldabra is truly ruled by the tides.

“This is not exclusive to animals such as reptiles, birds, etc., but also applies to SIF staff and all operations of the research station,” she said. “Every movement between islands and within the lagoon is decided by the tide and therefore the daily work schedule needs to always take the tides into consideration.”

In addition, Burt says some conservation observations are fully dependent on the tides and therefore the monitoring schedule must ensure that the right activities take place at the appropriate time.

“Tasks that might seem simple on any other island, for instance the quarterly supply of Aldabra by the supply boat, need to be carefully scheduled to avoid any unwelcome surprises,” she told SNA.

The importance of the tide could be observed on Monday when a stuck vessel was finally able to move with the help of a high tide after being lodged on a sand bank for three weeks following the delivery of some materials.

For many years, Aldabra’s tidal tables were based on data collected from the nearby Comoros and Mayotte islands, but the installation of a new tidal logger in 2015 has collected a year’s worth of data on the atoll, enabling SIF staff and volunteers to build a model to predict Aldabra’s tidal patterns.

“Until the Aldabra tidal logger was used to model the tides, we were using the tide times of nearby Mayotte and Comoros Islands and adding 50 minutes to these,” said Burt. “A previous attempt to collect tidal data from within the lagoon failed and another logger placed at the entrance of one of the channels has potentially been moved or covered as a consequence of the great speed and volume of water movement in and out of the Aldabra lagoon.”

The logger positioned on the outer reef of Aldabra in 2015 was more successful in collecting tidal data, but given the unique way that the tides work to fill such a large lagoon, it can sometimes be the case that one side of the island is experiencing a high tide while there is a low tide on the lagoon side.

“We are planning to make further attempts to collect lagoon tidal data,” she said. “It may be surprising to some to know that high tide in the lagoon is on average around two hours after high tide outside, this is a consequence of there being relatively small channels for the water to get in and out of the lagoon, taking the influx of the high tide water longer to reach the far corners of the lagoon and again longer to drain out again.”

The development of the tidal app

An SIF research volunteer, Fernando Cagua, has used the year’s worth of data collected by the new tidal logger and constructed a tidal model and online app that will allow SIF to predict the local tides with a much higher accuracy.

Cagua, who has never before developed a mobile app, told SNA that he decided to develop the app out of sheer necessity.

“I wanted to explore some of the mangrove forests in Aldabra,” he said. “To get there, whether by foot or by boat, you need to be very aware of what the tides are doing if you don't want to end up stuck in a remote location away from the research camp.”

Cagua, who is originally from Colombia, but lives in New Zealand and is studying towards his PhD, found himself having some trouble finding accurate tide predictions to help him carry out his research activities on the atoll.

“SIF had the raw data from the tidal pressure gauges but didn't use it because it required some complex modelling to translate it to tide predictions,” he told SNA.

“Because there is no 3G signal at Aldabra we can only use the app on WiFi connection close to the research station,” he said. “Everyone is using the app and it seems to have been very useful as it is much easier to plan logistics and research trips.”