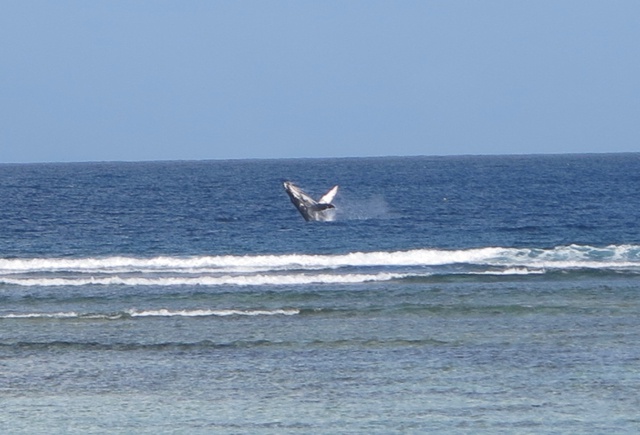 (Seychelles News Agency) - From July until October each year, the south-eastern trade winds bring pods of humpback whales to the Seychelles archipelago. The whales migrate northwards to warmer waters, thousands of kilometres from the cold waters of the Antarctic they call home, in order to mate and breed.

But this year conservation rangers and researchers stationed on the Seychelles' atoll of Aldabra -- one of the largest raised coral atolls in the world -- have reported that the season has ended with a sharp decline in humpback whale sightings.

According to the Seychelles Islands Foundation (SIF), which manages the UNESCO World Heritage Site, only nine sightings have been recorded this year, with the first sighting made later than usual on 13 August.

The SIF’s communications officer, Rowana Walton, told SNA: “In the past five years the number of sightings of humpback whales has fluctuated between 20 to 60 sightings per season.”

“To have just nine sightings this year is a notable decrease,” she added.

Although there is no monitoring programme in place, all the staff members at the SIF’s research outpost on the atoll look forward to the humpback whale season, each hoping to be lucky enough to spot the first whale of the season. Many will spend their free moments scanning the horizon with binoculars to see the majestic creatures.

Conservationists believe the decline in sightings could be due to the recent 2015-16 El Niño weather event, which elevated ocean temperatures across the world, causing extreme weather events and bleaching coral reefs.

With higher than average ocean temperatures, the krill that the whales feed on may not have been as freely available as usual, forcing the whales to either make shorter migration or even forgo the migration altogether.

The giant cetaceans, which can measure up to 16 metres long and weigh up to 36 tons, feed on krill and small fish in the sub-Antarctic (and in the Northern hemisphere, the sub-Arctic). They then make the long and arduous journey - up to 25,000 kilometres - to warmer waters, including those around the East African and Madagascan coasts and as far north as the Seychelles islands, mostly around the outer island atolls in the east of the archipelago such as Aldabra.

“If food is in shorter supply, it can be difficult for the whales to store the necessary energy needed to make such a long migration,” Walton told SNA.

Whale researchers in Australia have also noted a sharp decline in sightings of both humpbacks and southern right whales off the south-western coastline, and researchers there plan to team up with amateur whale spotters to try to gather more information about their migratory patterns.

It seems this change in feeding and breeding patterns is not isolated to the Southern hemisphere, either. Sub-Arctic whales from Alaska that usually go all the way south to Hawaii have decided not to make the journey, with whale researchers concerned about the non-appearance of the humpbacks to the Pacific islands.

However, other reports indicate that the whales may have been feeding much closer to home this year, with San Francisco’s SFGate reporting a sudden influx of humpbacks coming into the bay to feed, and Canada’s Times Colonist giving reports of plenty of whale activity off the coast of British Colombia.

Given the difficulties involved in tracking whales, Walton believes it could be possible that the whales usually seen at Aldabra chose to migrate instead to a different area of the western Indian Ocean this year.

SIF is collaborating with other partners to see whether this could really be the case.

“We are currently working with another NGO, Megaptera, to try and identify some of the whales seen within the Western Indian Ocean region. If possible, photos are taken of the dorsal fins of the humpback whales when they are seen at Aldabra,” Walton said. “These fins can be then used to identify individual whales and will help to build a picture of the migratory whale population in this region.”