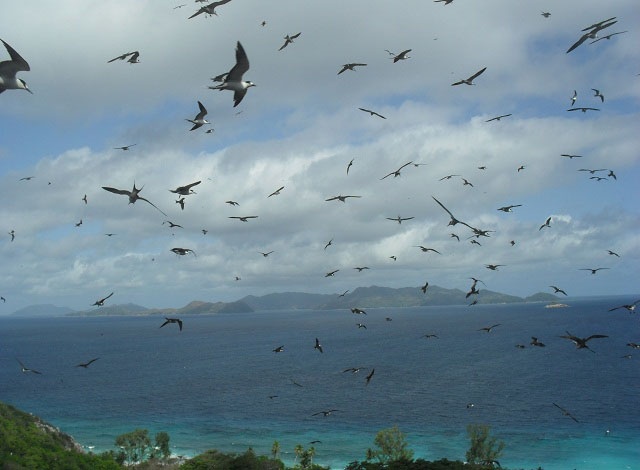 (Seychelles News Agency) - The northernmost granitic island in the Seychelles archipelago, Aride, is considered a haven for seabirds in the Indian Ocean. While some species like the fairy terns and white-tailed tropicbirds breed all year round on the island, other breeding seabirds are more numerous during the south-east-monsoon period -- from May to October.

It is for this reason that Island Conservation Society (ICS) -- a not-for-profit organisation which manages Aride Island -- chooses this period to carry out its annual census of the birds.

As Aride’s blue sky is starting to fill with young birds testing their flight skills, ICS is busy assessing the results of the 2016 count.

According to Melinda Curran, an assistant conservation officer, 2016 has been yet another good breeding season for seabirds on the island. Curran told SNA that this is especially so for the lesser noddies, which usually arrive on the island in April.

“They are the most numerous nesting bird and the population has increased,” Curran told SNA.

Recorded as breeding pairs, almost 200,000 pairs of lesser noddies were recorded -- the highest population of seabirds found on the island. The white-tailed tropicbirds were less in numbers with less than 500 pairs recorded.

According to conservation officers, while the fairy terns and white-tailed tropicbirds breed all year round on Aride, they are more numerous during the north-west monsoon period between December to March, when the cries of other birds die down.

The population of seven seabird species were recorded during the 2016 census – which started 20 days after the first sooty terns’ eggs are spotted on the island.

In the case of the sooty terns, the exercise has helped to shed light on the population of the species, which has experienced a steep decline on Aride over the past 15 years, from a high of 360,000 pairs. At the end of the latest census only some 26,000 pairs of the sooty terns were recorded.

With only handful of rangers living on the island, in previous years the decline was mainly attributed to poaching. In 2016, however, poaching has been successfully deterred due to the presence of armed guards on the island.

The sooty terns’ population is equally under pressure on other islands, as its egg considered a delicacy and enjoyed by locals and foreigners alike. A controlled amount of the sooty terns’ speckled eggs are picked for sale from the birds’ nests on at least two of the Seychelles islands -- Desnoeufs and Bird -- between June and July when the nesting season begins.

When it comes to the roseate terns, previous census had also indicated a decline in the number of nests found on Aride, and this year, the species has instead chosen to fly off to breed on a small rocky island, called Booby Island, off the coast of Aride.

“They are well known to be highly sensitive but we do not know what triggered this change,” Curran observed.

To conduct the census, ICS has 215 marked plots on trees located every 25 meters apart, all over the island. Half of these are checked one particular year and the other half is checked the next year.

ICS uses a system whereby a circle is formed around the trees, using a 10-metre long rope within which all birds found are counted, giving an indication of their population.

The annual census which ICS conducts on top of its year round monitoring started in 1988. This year the exercise was assisted by two representative of the United Nations Development Programme, UNDP.

Curran said that based on their yearly observations it has been found that “seabird population may increase or decrease in response to the health of the surrounding oceans and on land.”

Over-fishing, climate change, pollution, human disturbances, change in habitats and predators are some factors that according to Curran can contribute to a change in the population of seabirds.

Aride which was given the special reserve status under the Seychelles National Parks and Nature Conservancy Act in 1975 is considered an important bird area by BirdLife International.

The island hosts one of the most important seabird populations in the region and 18 species of native birds, including five only found in Seychelles, an archipelago in the western Indian Ocean.

Around 2,000 visitors land on Aride every year to see the different bird and plant species.

To further protect the seabird colonies on Aride, the Seychelles government recently extended the marine boundaries of the reserve by an additional 1.2 kilometres thereby protecting important feeding grounds for seabirds, in addition to their nesting areas.